Budget airline Lineas Aereas Azteca has been fined 4.5 million pesos (US$417,000; 293,000 EUR) for failing to correct the problems or refund airfare for canceled flights to consumers. 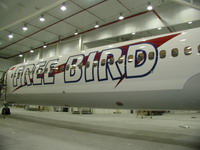 Antonio Morales de la Pena, the top attorney for Mexico's consumer protection agency, announced the decision Monday after the airline failed to provide documentation on its operations or explain how it plans to reimburse 2,739 customers.

Mexican officials ordered the airline to stop flying in March after inspectors found it was not complying with safety procedures and mandatory training for pilots, technicians and maintenance personnel.

The Communications and Transportation Department said earlier this month that it had initiated proceedings to revoke Azteca's concession because the company hadn't fixed the problems within a 90-day grace period. The department also described Azteca's finances as "grave."

If the company refunds airfares to consumers the fine could be reduced, Morales de la Pena said.

The airline's listed phone numbers were out of service Tuesday, and an e-mail requesting comment was not immediately returned.

Azteca is the second low-cost carrier the government has grounded in the past 18 months. Aerocalifornia's service was suspended in April 2006 for safety reasons, but the airline resumed some operations four months later.