The reality of events in Syria, terrorist groups linked to Al Qaeda massacred civilians on the eve of Annan's visit to Damascus. 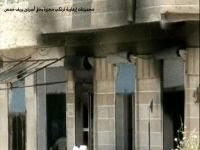 On the eve of Annan's visit to Syria, as part of the escalation of their murders and terrorism to which they always resort before any meeting of the Security Council is held, armed terrorist groups affiliated with Al Qaeda have carried out two horrible massacres against families in the villages of al-Shomariye and Teldo, located in the area of ​​Homs.

An informed source revealed to the SANA correspondent in the province of Homs that Al Qaeda has committed a horrendous slaughter against the al-Shomariye family, consisting of a father, his wife and 6 children, and a citizen and his son.

Also, followers of Al Qaeda terrorists killed a family of 7 members, 3 of them are children.

Terrorists were killed while they were preparing an explosive device in the area of Aleppo.

Meanwhile, a number of terrorists belonging to Al Qaeda were killed or wounded by an explosive device they were preparing in the town of Tal Rifaat, in the area of Aleppo.

On Saturday, in the town of Muhasan located in the area of ​​Deir Ezzor, an armed terrorist group intercepted a bus that transported engineers and technicians of the Al-Furat oil company as they were going to their place of work at the Omar deposit site, and kidnapped them with the bus to an unknown destination.

A terrorist group robbed 12 million Syrian pounds from an office of the Agricultural Bank in Bukamal.

Saturday, an armed terrorist group attacked a branch office of the Agricultural Bank branch in the city of Bukamal in the province of Deir Ezzor.

SANA correspondent quoted a source in the province that the armed group stormed the office and threatened the treasurer, then stole a sum of 12 billion Syrian pounds.

The competent authorities discovered a factory being used for preparing explosive devices on a farm in the area of ​​Homs.

The competent authorities also discovered a warehouse and a workshop used by armed terrorist groups to manufacture explosive devices on a farm in the town of Al-Kuseir in the area of Homs.

A SANA correspondent quoted a source in the province that the warehouse contains large quantities of raw materials needed for making explosive devices.

Terrorist groups set fire to houses and crops in the area of Homs to allege that the area is being bombed.

Terrorist groups set fire on Friday night to some houses in the village of Taldo in the town of Al-Houla located in the area of ​​Homs.  Other homes were dynamited to give a false impression, aided by the instigating mass media to blame Army forces for bombing the area.

The SANA correspondent was informed by a source in the government, that these groups also burned the state hospital in the above-mentioned town and a center for the forces that maintain law and order.

"These terrorists have committed several acts of sabotage in the same area such as burning the agricultural crops of the peasants," the source pointed out.

The terrorists fired six mortar shells from the district of al-Warshe neighborhoods against al-Nuzha and al-Hadara in Homs.

A medical source reported that the citizen, Janet Mikhail al-Akhras, was martyred, while ten other people were injured in these attacks on residential neighborhoods.

The competent authorities clashed with armed terrorist groups in the village of al-Blaliya in the area of Duma.  The clash resulted in the arrest of several elements and the death of others. An official source revealed to the SANA correspondent that the authorities confiscated the terrorists' weapons, explosives and ammunition that were in their possession, plus a stolen car from the Water Department in the Damascus countryside.

The competent authorities seized of a number of weapons in the neighborhood of al-Waer in Homs.

The  authorities also seized in the neighborhood of al-Waer in Homs, a car that was parked near the fairgrounds within which was discovered a number of different types of weapons. The weapons seized include 6 rifles, 3 shotguns (pump action type), grenades, explosive devices, large amounts of ammunition, military uniforms and bandoliers and phony license plates.