Developers are going to make a new neighborhood of 70-story office towers, apartments, hotels and green parks out of desolate stetch of government-owned rail yards on New York City's West Side waterfront. 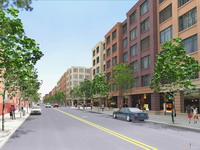 The biggest names in New York real estate and such corporate giants as Conde Nast and Morgan Stanley are turning in bids due Thursday for rights to the 26 acres (10.5 hectares), one of the last spots for new building in crowded Manhattan.

Urban scholars say the plot is crucial to the city's future.

"To me, it's a pressure site, because it's the last large site," said Robert Caro, who chronicled one of New York's most important development periods in his book "The Power Broker." "It's a testing ground in my mind for what is going to be considered important as New York leaps forward bigger and bigger."

Business leaders see the Hudson Yards project as a chance to extend midtown Manhattan - the most expensive U.S. commercial market - to the west, joining a planned development of offices near the Penn Station train station, Madison Square Garden arena, and an expanded Javits Convention Center near the Hudson River.

The multibillion-dollar price of building up to 24 million square feet (2.23 million square meters) of office space - plus over 13,000 apartments, a school, arts center and parkland - could force companies to pay the highest rents, said Steven Spinola, president of the Real Estate Board of New York.

The locale might attract a slightly different type of business, he said.

"Because of the open space, because of the water, you may get some of the more creative-type businesses who might want to be in a setting that is not as midtown-structured," Spinola said. "The problem is, can they afford to pay those rents?"

So far, at least two developers are paired with guaranteed corporate tenants to beef up their bids to the Metropolitan Transportation Authority, which owns the land.

The Durst Organization, in a venture with Vornado Realty Trust, will bring magazine empire Conde Nast Publications with it to the far West Side if its bid is chosen. The media giant helped start a Times Square renaissance by moving many of its 3,500 New York City employees there in the late 1990s.

Tishman Speyer Properties, the owners of Rockefeller Center and the Stuyvesant Town apartment complex, is guaranteeing investment bank Morgan Stanley as a tenant if its bid is successful. Related LP, which developed the Time Warner Center at Columbus Circle, is another bidder.

The winning developer will likely have to spend about $1.5 billion (1 billion EUR) to build platforms over the existing rail yards, billions in construction costs and well over $500 million (353.5 million EUR) for the development rights.

The city led a failed bid two years ago to develop a football stadium for the New York Jets at the site, hoping the project would serve as a linchpin to host the 2012 Olympics. But residents objected to the tax burden of the $2 billion (1.4 billion EUR) stadium and members of a state board that rejected it worried that the planned office space would compete with development downtown at the World Trade Center site.

The transit authority asked asked developers to "create a signature addition to New York City's skyline," affiliate itself with an arts institution that could anchor an indoor/outdoor cultural center, and create vibrant streetscapes with shops and open space for pedestrians and residents.

Anna Levin, who chairs the neighborhood's committee for a local community board, said residents need a mix of uses for the 45-square-block area, so "it doesn't become Shanghai-on-the-Hudson."

"These are going to be overwhelmingly large buildings. It's got to be green," she said, saying the open space has to connect to the apartment buildings, most of which are planned closer to the river.

Historians also are concerned about the High Line, an abandoned, elevated railroad that preservationists hoped to turn into a 1.5 mile (2.4 kilometer)-long park. Bidding developers have to address the High Line, but are not required to keep it in their plans.