Live Arts Festival in Philadelphia shows acts from all over world

The best acts of Philadelphia and the world could be seen at this year's Live Arts Festival and Philly Fringe. 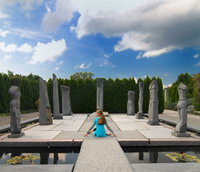 Live Arts Festival in Philadelphia shows acts from all over world

The 11th annual festival, running Aug. 31 through Sept. 15, will stay true to its original mission of providing a place for established, if experimental, contemporary dance and theater acts to perform alongside a jumble of emerging, local artists.

In that way, the festival is really two linked events: the approximately 30 hand-picked and curated acts in the Live Arts Festival, and the nearly 150 rambunctious, self-produced artists that make up the Philly Fringe.

"But Philly Fringe is a wild, wonderful adventure of artistic ideas that we really don't know much about until we see them," Stuccio said.

Put together, "it's a snapshot of everything new," he said, that has grown from an original audience of 6,000 to the expected 45,000 attendees this year. Since its inception, the festival has presented work from more than 1,500 performance groups, with producers sometimes working for years to bring busy artists to the late summer extravaganza.

This year's event will explore issues such as ethnicity, class and culture from a decidedly international perspective. In "Map Me," Belgian performers probe notions of identity by using their nude bodies as canvases for video projections. In "Delta," three Bulgarian women imagine facing death, and a pair of Dutch dancers perform a duet right in the viewers' homes in "Kamerdans."

Born in Vietnam and trained in Paris, choreographer Ea Sola said she hopes that "the body as a thought - as a conscience dancing his mind, his imagination, his hope," will be evident in the piece she's presenting at the festival, "Drought and Rain Vol. 2."

The piece seeks to express how young people in Vietnam feel about a war they never lived through in their own country and about wars they only experience through television in other countries. It was inspired by a modern Vietnam of "luxury cohabiting with poverty, with television screens invaded by images of wars ... appearing everyday like an object," Sola said.

The festival will also highlight work from local Philadelphians and from artists who have settled here after beginning their careers as far away as Havana, Berlin and Buenos Aires, Argentina.

"Artists can still live here and work here," Stuccio said. "There's a wave of smart work-making going on, and we're taking full advantage of that."

The hometown Pig Iron Theatre Co.'s play, "Isabella," is set in a modern morgue, where the undertaker works through his personal problems by compelling dead bodies to act out parts of Shakespeare's "Measure for Measure."

"It's a bit of an affront to people who like their Shakespeare in period dress with lofty elocution," said Pig Iron's John Frisbee. "We're trying to reinvest in the sense in which the play makes you sit up and really pay attention."

And with many of the actors delivering their lines in the nude, it may be difficult not to notice.