Russia's chief prosecutor said Monday that he had asked British authorities to strip self-exiled tycoon Boris Berezovsky of his asylum and extradite him, news reports said. 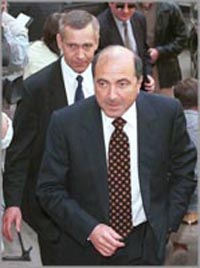 Prosecutor General Yuri Chaika said he sent a new request for Berezovsky's extradition to Britain's Home Office Monday over the exiled tycoon's call for a forcible change of power in Russia, the Interfax, ITAR-Tass and RIA Novosti news agencies reported.

In comments first published Friday in Britain's Guardian newspaper, Berezovsky said the Russian leadership could only be replaced by force and that he was in contact with Kremlin insiders who supported his vision for change.

Berezovsky later issued a statement to "clarify" his words, saying he did not "advocate or support violence." He did, however, say that under Putin's government "elections are not a viable means of ensuring democratic change in Russia."

Berezovsky's latest remarks come amid rising tensions ahead of Russia's parliamentary elections in December and a presidential vote next March. Critics say the Kremlin has tightened control over Russia's political landscape to engineer a smooth transfer of power to a handpicked successor to Putin who is approaching the end of his second and final term.

Berezovsky - who once controlled an oil, automobiles and media empire here - gained a reputation for ruthlessness in the 1990s when he became one of Russia's wealthiest tycoons in the chaotic and often-violent post-Soviet period.

Chaika also said Monday that his office had concluded a probe into Berezovsky's alleged embezzlement of hundreds of millions of dollars (euros) from the national airline Aeroflot. Berezovsky has dismissed the case as politically driven.