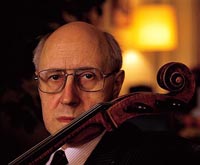 The musician was released on Tuesday and now "feels well," Rostropovich's press secretary Natalia Dolezhal was quoted by Interfax as saying.

Rostropovich, 79, was hospitalized last month for unspecified reasons first in Paris and then in Moscow. His hospitalization was revealed when the Kremlin said Putin had visited him in a Moscow hospital on Feb. 6.

Two Russian newspapers later reported that Rostropovich was being treated at Russia's leading cancer clinic, but aides declined to comment on the reports.

His spokeswoman could not immediately be reached for comment Wednesday.

Interfax said Rostropovich was to celebrate his 80th birthday on March 27 at the Kremlin.

Rostropovich went into exile from the Soviet Union with his family in 1974 after housing dissident writer Alexander Solzhenitsyn for four years, which cost him his Soviet citizenship, reports AP.

Three years after his exile, he became music director of the National Symphony Orchestra in Washington. He held that the position until 1994 and retains the title conductor laureate.