Monday near the Turkmen-Uzbek border Chinese President Hu Jintao and his counterparts from Turkmenistan, Kazakhstan and Uzbekistan put into operation a natural gas pipeline linking the four nations. 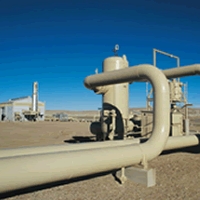 With their hands on wheel of valves, President Hu and Turkmen President Gurbanguly Berdymukhamedov, Kazakh President Nursultan Nazarbayev and Uzbek President Islam Karimov turned on the flow of natural gas together in the gas plant on the right bank of the AmuDarya River.

Meanwhile, the 1,833-kilometer gas pipeline starts at the gas plant near this border town in Turkmenistan and runs through central Uzbekistan and southern Kazakhstan before entering China at the border pass of Horgos in the northwest region of Xinjiang, Xinhua reports.

The pipeline, starting near a Chinese-developed gas field in eastern Turkmenistan, is expected to reach full annual capacity of 40 billion cubic metres by 2012-13 and help Beijing propel its explosive economic growth.

In the windswept settlement of Saman-Tepe, festooned with Chinese and Central Asian flags, officials cheered and hugged after the four presidents symbolically turned the pipeline tap, injecting the first gas with a loud humming noise.

A nearby gas plant, its metal chimneys sparkling in the sun, was adorned with huge portraits of Hu and Central Asian leaders.

"We have to join forces at a time when the world is going through a difficult period," Hu said at the ceremony. "I hope we will be not only good neighbours but also reliable partners," Reuters reports.

It was also reported, Turkmenistan produces around 70bn cubic metres of gas annually - almost the same amount that had until recently been purchased by Russia, Turkmenistan's biggest client.

Supplies stalled following an accident in April on the main pipeline to Russia. So far the two countries have failed to agree new terms, causing Turkmenistan to lose around $1bn a month.

Turkmenistan is nearing the completion of another pipeline to Iran, and expressed an interest in supporting the EU-backed Nabucco project.

President Hu and Kazakhstan's President Nursultan Nazarbayev unveiled the Kazakh section of the pipeline in Astana on Saturday.

It is Kazakhstan's first export route that does not go through Russia, BBC News reports.