Southern New Zealand is under attack of strong quake

A 6.7 earthquake shattered southern New Zealand early Tuesday local time, there are no immediate reports of injury or damage. 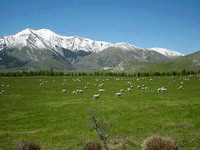 Southern New Zealand is under attack of strong quake

Three moderate aftershocks, one of magnitude 5.6 and two earlier magnitude 4.9 and 4.6 shakes, have since rattled the region.

The Pacific Tsunami Warning Center in Hawaii issued an information bulletin stating that it did not expect a destructive tsunami to be generated by the quake.

Police senior sergeant Bruce Ross in the southern city of Dunedin said, "We felt it (here), but there are no reports of injury or damage."

"We heard the blinds rattle a bit, but that was it," he added.

Inspector Alan Weston in the southern city of Christchurch said about 10 people had called shortly after the quake, but "we have no reports of damage or any injury," adding the sharp quake was "not felt in Christchurch."

"I would expect aftershocks, probably of magnitude 5 earthquakes, in the next day or so," said GNS duty seismologist Mark Chadwick.