The Portland Trail Blazers recognized early on that guard Brandon Roy's last name was an acronym for Rookie of the Year. Roy lived up to it, leading all rookies with averages of 16.8 points, 4.0 assists and 35.4 minutes in 57 games, and on Wednesday he was awarded the NBA's Eddie Gottlieb Trophy. 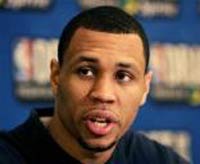 "This is 10 times better than I thought it would be," Roy said at a celebration before local school children.

Although Roy was expected to win the honor, he could not stop grinning. As the children cheered, he was joined by teammates, including Darius Miles, Zach Randolph, Ime Udoka, Fred Jones and Dan Dickau.

"Now that it's over I want to work hard and get better and be an All-Star," he said.

He received 127 of 128 first-place votes (638 points) from a panel of writers and broadcasters. Toronto's Andrea Bargnani finished second with 264 points, including the other first-place vote, and Memphis' Rudy Gay was third with 93 points.

"This guy competes. He wants to win, and he'll do anything out on that floor to win ball games," Trail Blazers coach Nate McMillan said.

Roy is the third Trail Blazer to win the award, joining Geoff Petrie (1970-71) and Sidney Wicks (1971-72).
The Blazers finished 32-50, with 11 more wins than the previous season, but they failed to make the playoffs for the fourth straight year, the AP reports.

He led the Trail Blazers in scoring in seven of his final 10 games of the season and was named the Western Conference rookie of the month in January, February and March.

The 6-foot-6, 229-pound guard scored a career-high 29 points against Utah on April 4 and was selected for the All-Star game's rookie squad.

He averaged 4.4 rebounds per game and ranked third among rookies in free-throw percentage at 838.

Roy will receive the Eddie Gottlieb Trophy, named in honor of one of the NBA's founders, who coached the Philadelphia Warriors to the championship in 1946-47, Reuters reports.