America and Poland to negotiate on missile defense

Poland and America will open negotiations next week on Washington's contentious plan to place part of a missile defense system in Poland. 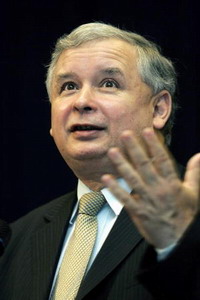 America and Poland to negotiate on missile defense

Robert Loftis, the State Department's senior adviser for security negotiations and agreements, will head the talks that are to begin Monday in Warsaw, said embassy spokesman Andrew Schilling.

Washington wants to place 10 interceptors in Poland and a radar base in the neighboring Czech Republic, a system it says would protect most of Europe from long-range air strikes launched from Iran.

The plans, however, have raised concerns through much of Europe that placing bases in former Warsaw Pact countries could spark a new arms race with a resurgent Russia. Moscow has strongly opposed the plans.

Warsaw's Prime Minister Jaroslaw Kaczynski has signaled a willingness to host the base, but has stressed any deal must increase Poland's security.

Schilling said the initial talks will focus on so-called status of forces issues, that is, the legal status a U.S. base and its personnel would have in Poland.