Hillary Clinton does not expect President George W. Bush to pull U.S. troops out of Iraq before he leaves office even though they are mired in a civil war "where they're not even sure whose side they are fighting on." 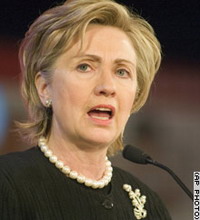 "If this president does not end this war before he leaves office, when I am president, I will," the Democratic hopeful for the 2008 elections told an enthusiastic crowd of more than 3,000 at a Reno high school. Bush's term ends in January 2009.

When some in the gymnasium shouted "Bring them home," she replied, "That's what we're trying to do."

"We are ready to try to end this war in Iraq. I am so proud of your Senator Harry Reid," she said about the Democratic Senate majority leader from Nevada, eliciting a 15-second-long standing ovation.

Clinton praised Reid's efforts to pass a military spending bill with a timetable to begin redeploying troops out of Iraq by October but said she doubts Bush ever will go along with it.

"I wish I could tell you that he's going to ... start listening to the will of the American people," she said.

"I wish I could tell you that he will change direction, but I think we are going to have a very difficult time because he is convinced he is right.

"If he were standing here today he would tell you all he is convinced he's right. He believes that history will judge him to be right. I think he is woefully mistaken about that," Clinton said to cheers.

"We should take them out of this sectarian civil war where they're not even sure whose side they are fighting on," she said.

"We should also do more to require the Iraqi government to defend itself. We can't win this war for them. It's their war," she said.

Clinton said there does not appear to be the "appetite or support" in Congress to try to impeach Bush, but "we're going to have to reform the government and these unqualified cronies."

Clinton spoke for about 45 minutes at a townhall meeting dubbed "A conversation with Hillary," walking back and forth on a stage in the middle of the gymnasium at Hug High School.

She also took questions from about a dozen people for an additional 20 minutes before leaving for meetings in California Sunday afternoon.