Spanish prosecutors banned a new Basque party, calling it a successor of Batasuna which had links to armed separatist groupETA. 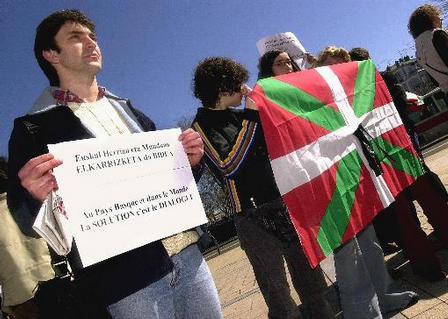 The new party, Abertzale Sozialisten Batasuna, or ASB, contains several elements indicating it is a continuation of Batasuna, which was made illegal in 2003, Attorney General Candido Conde-Pumpido said after prosecutors filed the lawsuit with the Supreme Court.

The new group, whose name stands for Patriotic Socialist Union, had been registered by members of Batasuna last week in the hope that it could field candidates for municipal elections on May 27.

"ASB is a succession or continuation of Batasuna," Conde-Pumpido said. He said people behind the new party have links with ETA and Batasuna. He also highlighted the use of the word "Batasuna" in its name.

He said that while the case is being studied at the court, the party cannot be officially registered.

Pernando Barrena, a leader of Batasuna, said the pro-independence movement expects the new party to be banned and will skirt this by fielding independent candidates that share Batasuna's goals but not its name. He called the prosecutors' drive "political suffocation."

Batasuna was banned under a specially drawn up law that insists all parties must denounce violence, something it has so far refused to do in relation to ETA's campaign for Basque independence, which has claimed more than 800 lives since the late 1960s.

ETA broke a nine-month cease-fire with a bombing on Dec. 30 that killed two people, derailing a nascent peace process.

Batasuna leader Arnaldo Otegi claimed last week that banning the new party would be a "major attack against democratic liberties." He said the new party was fully within the law.

In its registration documents, the party stated its aims were to achieve independence and socialism by "exclusively democratic political means," but made no explicit condemnation of violence.