Akmal Shaikh, a British national who was convicted of smuggling drugs into China, was executed by lethal injection on Tuesday in Urumqi after approval from China's Supreme People's Court (SPC). 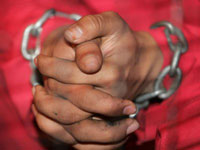 The 53-year-old British man Shaikh was arrested in September 2007 in Urumqi, capital city of Xinjiang Uygur Autonomous Region in possession of 4 kilograms of heroin, 80 times the threshold for a death sentence (50 grams) under Article 347 of China's Criminal Law for heroin smuggling, trafficking or transporting.

Shaikh was sentenced to death in the first instance by the Intermediate People's Court of Urumqi on Oct. 29, 2008 and his final verdict came in October after two failed appeals.

The SPC said Tuesday that it had reviewed and approved the death sentence against Akmal Shaikh, Global Times reports.

"I condemn the execution of Akmal Shaikh in the strongest terms," U.K. Prime Minister Gordon Brown said in a statement released by the Foreign Office. "No mental health assessment was undertaken."

Shaikh’s execution is the first of a national from a European Union country in China in more than 50 years, according to Reprieve, a charity that campaigns for death row prisoners globally. China carried out more executions than the rest of the world put together last year, Amnesty International says.

"We have carried out the matter according to Chinese law," Foreign Ministry spokeswoman Jiang Yu said in Beijing at a regular press conference. “We are extremely disappointed by the comments made by the U.K. and we urge the U.K. to take appropriate action to ensure that Sino-British ties aren’t harmed," Bloomberg informs.

A statement from the Chinese Embassy said: "During the legal process, Mr Shaikh's rights and interests were properly respected and guaranteed and the concerns of the British side were duly noted and taken into consideration by the Chinese judicial authorities.

"Out of humanitarian consideration, visas were granted to the two cousins of Mr Shaikh on Boxing Day, and they were given access to meeting Mr Shaikh in China," The Press Association informs.