Russian tourist crashes his yacht at island in Croatia

A yacht navigated by a drunken Russian crashed into the coast of the island of Hvar in Croatia, local newspaper Večernji List said. 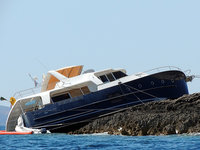 The incident occurred on Sunday, August 26, at about 15:00 in Stipanska Bay on the south side of the island, Danas.hr said. A passenger of the yacht, 37-year-old Russian citizen Viktoria V., suffered minor injuries. The woman was on board the "John Dory" yacht with Russian citizen Sergei G., 52. According to police, the man was navigating in a state of alcoholic intoxication.

The local authorities are concerned that the vessel may sink. Judging by the photos from the scene, the nose of the boat rests on a rocky shore, whereas the stern is in the water. Local rescue services do their best to prevent the fuel spill.

Another incident on water with the participation of Russian tourists took place in early July on Lake Pyramid in Castaic, Los Angeles County, USA. A 16-year-old tourist from Russia was riding a jet ski with a 30-year-old man, when their vehicle rammed into a motorboat. The teen boy died from multiple injuries.

The man, who was riding the jet ski with the teenager, was admitted to the hospital in a critical condition. The man on board the motorboat was not injured.

Apparently, all three participants of the collision were Russian tourists who were vacationing together. None of them was drunk at the moment of the accident.