Russia 's state-controlled gas monopoly Gazprom said Tuesday it agreed to settle Ukraine's debt for gas supplies, seeming to resolve a dispute that has raised concerns of a supply cut to Europe and added to the political uncertainty in Ukraine. 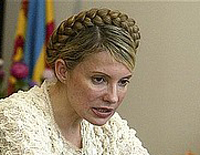 Ukraine would repay $1.2 billion (850 million euros) of the debt by transferring gas from underground storage facilities in Ukraine to Gazprom for further export, Zubkov said during a televised meeting with Ukraine's Prime Minister Viktor Yanukovych in Moscow.

The remaining $929 million (659 million euros) is to be paid by the companies that supply gas on the Ukrainian market, he said.

To find out more about the present-day relations between Russia and Ukraine Pravda.Ru has interviewed an expert in the Ukrainian policy Margarita M. Balmaceda, School of Diplomacy and International Relations, Seton Hall University, and Harvard Ukrainian Research Institute, Harvard University.

Margarita Balmaceda :Yes, I believe the Russian government uses gas as a tool to influence both Ukrainian domestic politics, and Ukraine’s international policy. The recent crisis involving “Ukraine’s $1.3 billion debt to Gazprom” is a good example of this. Although the Russian side knew for months already that the debt was accumulating and would reach a critical point in late September, the issue was not “made” into a crisis until it was politically expedient to do so.

First, the Russian side avoided making a “big deal” of the issue while the election campaign was going on, presumably in order not to diminish Yanukovich’s chances of winning by giving the Bloc Yulia Timoshenko more ammunition against the current PM and Government. At the same time, bringing the issue up exactly at the time when coalition-formation negotiations are going on is a way to seek to affect, indirectly, the outcome of these negations. Not to speak of the fact that it is exactly this month that negotiations on Ukraine’s gas supply for 2008 have to take place, and highlighting this crisis exactly at this moment is a way to put pressure on the Ukrainian side.

So, indeed, the Russian government uses energy as a tool of political influence in Ukraine, as it has been doing since at least 1994. But what we should not forget is that, in addition to political goals, there are also many economic interest involved, including some related to corruption, andthat certain players in the Ukrainian side have benefited as much from then as actors on the Russian side. (I discuss this issue in length in my book, Energy Dependency, Politics and Corruption in the Former Soviet Union: Russia’s Power, Oligarch’s Profits and Ukraine’s Missing Energy Policy, 1995-2006 (RoutledgeCurzon, 2007), which should be coming out later this month.)

I must add that the whole way in which this latest gas crisis has played out is very worrisome. It is very clear to me as well to Ukrainian energy experts that this is not Ukraine’s state debt, but RosUkrEnergo’s private debt, so it is very worrying that the Ukrainian government has decided to treat it, basically, as state debt. Moreover, the sudden increase in the debt from $1.3 billion to $2 billion tells me some non-transparent business may be going on. It is exactly on this question that the Yulia Tymoshenko bloc has asked the RNBO (Natsionalnii Soviet po Bezpeki I Oborony) to look into in an urgent manner.

Pravda.Ru: Do you think that the victory of Ukraine’s Orange bloc in the elections is a step towards democracy in Ukraine? Why?

Margarita Balmaceda : It is a step towards democracy in the sense that the population has delivered a clear “no” to two parties, that, whether we like it or not, has been involved in non-transparent dealings in Ukraine, including in energy relations. In particular, the success of the Yulia Timoshenko bloc, which campaigned calling for a repudiation of the January, 2006 gas agreements with Russia, represents a clear popular “no” to that way of doing business.

More broadly, the increase in support for Tymoshenko in some of the central parts of the country speaks of a broader trend in which some of the regional divides in politics may be softening, and that is a very positive development for Ukraine.

Pravda.Ru: How could the election results change Ukrainian-Russian and US-Ukrainian relations ?

Margarita Balmaceda : If a Tymshenko government comes to power, it is very likely that the January, 2006 gas agreements with Russia, involving the intermediary company RosUkrEnergo, will be repudiated. In that case, the energy relationship with Russia, intermediaries and Central Asian producing states will need to be renegotiated. This could touch important economic and political interests on both sides of the border.

Concerning relations with the US, I would expect them to improve somehow should an “orange” coalition come to power, but I do not think the effect will be so drastic. With the exception of the question of NATO, Yanukovich has tried to present himself – and to act—as someone who understands Ukraine’s interests lay, in the final analysis, in closer integration with Western (in his view, mainly Western European) institutions.