Syrian air defenses opened fire on Israeli aircraft after they violated the country's airspace on September 6th in a "flagrant and aggressive act," according to a Syrian military spokesman. Syrian air defenses forced the aircraft to leave “without causing human or material loss." 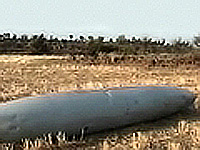 A Syrian army spokesman told Sana news agency, "Enemy Israeli planes penetrated Syrian air space from the Mediterranean Sea heading towards the northeast, breaking the sound barrier." Israeli jets reportedly dropped ammunition over deserted areas of northern Syria and the ammunition dropped is being examined. Syrian President Assad confirmed that the Israeli raid had targeted an abandoned military base in Syria. Syria and Israel remain technically in a state of war, but a cease-fire has held on the Golan Heights since 1974. At the beginning of last summer's war against Hezb’Allah in Lebanon, Israeli aircraft flew over the palace of President Assad in what analysts called a warning to Damascus.

The United States is believed to have provided Israel with intelligence before the raid, which hit the Syrian facility in the dead of night to minimize casualties. According to unnamed Israeli sources, American air force codes were provided to the Israeli air force attaché in Washington to ensure Israel’s F15Is would not mistakenly attack US counterparts.

Israelis initially denied the occurrence and declined to comment on the incident, and Syria's complaint to the United Nations for violating its airspace received no response from Israel. Censorship on the IAF air strike was ultimately lifted, but still remains on the details of the action. While the Israeli government was “very happy” with the success of their attack according to CNN, China's Xinhua news agency said North Korea had issued a harsh condemnation of the IAF incursion into Syrian airspace.

Wild speculation and allegations have followed Israeli denials. Jane's Defense Weekly claimed to have proof of cooperation between Iran and Syria in the development of weapons of mass destruction.

It seems rather bizarre to see such allegations occurring once again in yet another situation similar to Iraq. The report alleges that Iranian engineers and Syrian officers were killed in an accident in Syria that took place on July 23rd. Syria is said to possess between 60 and 120 Scud-C missiles and North Korean engineers were supposedly working on extending their 300-mile range. According to the allegations, Syrians and Iranians were attempting to place a chemical warhead on a Scud missile when an explosion occurred spreading chemical warfare agents, including sarin nerve gas. Another story alleged that there were Iranian weapons heading to Hezb’Allah.

Syrian President Assad was asked if the attack was made to send Syria a message “You cannot talk about peace and carry out attacks against a neighboring country. This is the only message that we got. For us it reflects the fundamental antipathy of Israel towards peace. That is how we see it.” Assad further stated that retaliation would only work to further Israel’s agenda. Syria is only interested in regional stability. When questioned about the rumors of a Syrian nuclear program, President Assad called it a reminder about what happened before the war in Iraq when it was claimed evidence existed that Iraq had nuclear programs or WMD programs and the evidence turned out not to exist at all. “So, about the propaganda, we do not have to waste our time about propaganda, because it is the same story.”

Peace and security for Israel and its people cannot be achieved by military means, but only by a change of policy in the direction of acting for a just and lasting peace with the Palestinians, Syria and other Arab neighbor countries, mutually respecting the human rights and aspirations of all peoples and nations concerned, as well as principles of international law. A genuine political solution including discussion, debate and dialogue is necessary. The exclusive reliance on brute force and military solutions by Israel and the empire only further aggravates an already tense and precarious situation.