In an exclusive interview with PRAVDA.Ru, Falah Alwan, President of the Federation of Workers’ Councils and Unions in Iraq (FWCUI), declared that the question of Iraq is an international issue and for this reason its resolution belongs to the international community, its associations and institutions. 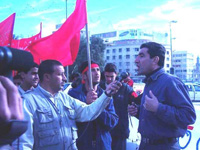 During the time when Saddam Hussein was all powerful in Iraq, Falah Alwan was already working secretly, organising workers’ committees, trying to arrange funds to compensate families in cases of accidents at work, because Trade Unions were forbidden. Elected President of FWCUI for the second time in 2005, Falah Alwan continues to fight against the old decrees from the Saddam era, used by the puppet regime which continues to practise many of the abuses of the former Government, continues to prevent the formation of Trade Unions and which is nothing more than the political arm of the various armed factions in Iraq, whose authority is restricted to the Green Zone in Baghdad.

In Lisbon, at the invitation of the Union of Teachers/Professors of Greater Lisbon, Falah Alwan gave the following exclusive interview to PRAVDA.Ru

PRAVDA.Ru: What is the current situation of the Union movement in Iraq?

Falah Alwan: The authorities continue to evoke Saddam Hussein’s decrees, which crushed attempts to form workers’ unions and so there is still a constant fight which needs the help of international movements. We began with the Unemployed Workers’ Union and we held 13 demonstrations under the theme “Work or Social Security”, a movement which obliged the authorities to set up an unemployment fund, however they refer to this as an extension of the previous legislation and would never admit it as our victory. We continue in the Federation of Workers’ Councils and Unions in Iraq to work actively to coordinate activities with Workers’ Councils around the country.

PRAVDA.Ru And how could one describe daily life in Iraq today?

Falah Alwan Apart from the violence, which is tremendous, unemployment has shot up. The small factories from Saddam Hussein’s time, which mainly employed women, disappeared and the large industries which employed hundreds of thousands of men, also...bringing about a situation in which the authorities admit an unemployment rate of between 30 and 35 per cent when in reality it is closer to 50% or even more.

The cost of basic necessities has also risen greatly, the cost of fuel, in a country which produces so much, soared and in large areas there is no electricity, and so the firms have paralysed. This is the result of the occupation, which serves for nothing. And to give you one example of the daily life in Iraq, for instance, in the centre of Baghdad, a taxi journey from the city centre to the airport, a half-hour trip, now costs 60 USD because of the danger involved and the road is called “death way”. There are murders, kidnappings, bombings, every day.

PRAVDA.Ru And what do the Government and foreign troops do to reduce this violence and criminal activity?

These factions in the Government speak with the armed militia and discuss together how to retain the positions they have gained, how to maintain the balance of power and the status quo. As for the Americans, they stay in their bases because they do not know how to maintain law and order and the violence is a direct result of their invasion and occupation. And it is getting worse.

Iraqi society is divided like never before, it is split between sects, religions, languages, ethnic groups, which for the first time gains any relevance at all. Inside Baghdad there is a wall separating the various sections of our society, like a Berlin Wall.

PRAVDA.Ru And this situation did not exist in Saddam Hussein’s time?

Falah Alwan This division did not exist but also, Saddam Hussein had lost power alreadybefore the invasion, some years before, and the Americans knew about this. At any time, a revolutionary Socialist government could have appeared and it would not have been difficult to overthrow Saddam in the last days of his regime, it was a question of when and not if. Maybe to neutralise any possibility of this happening, of a Socialist and progressive regime installing itself in Iraq, and to prevent any such shock waves reverberating through the region, they invaded. Let us remember that 70% of Iraqis live in the cities, many of these being workers.

PRAVDA.Ru Have the Unions and workers’ movements received support from abroad?

Falah Alwan Yes, recently, when the Oil Minister decreed that the organisers of a strike in this sector should be thrown into jail, there was a wave of indigations from workers’ movements and Unions in the United States, the UK and other countries, which forced the Minister to reconsider, this was in July. The Government itself does nothing to help us because it considers us as illegal and prevents the workers from organising, using draconian measures from Saddam’s time. However, the Government represents itself and no-one else, and this, only in the Green Zone.

In the Government’s discourse, its enemies are terrorists and the remnants of Saddam’s regime when in fact each faction in the Government has its own militia. We can say that the Government depends to a large degree upon the militia controlled by Iran but even within the different factions of the militia, there are many sub-groups.

Falah Alwan Ha! I’ll give you an example. When some militants established an ad hoc check point in Basra city and wanted to beat a woman for walking around without her veil, these British soldiers said they had nothing to do with it because it was a question of “local culture” and did not defend the woman. The job done in Basra? Well, I would say that this city and the region around it is now under the influence of Iran, its agents and of criminal gangs. Those who control the city are armed militia groups, which the United Kingdom did nothing to prevent from imposing their authority on the city.

PRAVDA.Ru And what is the way ahead?

Falah Alwan It is in the interests of the workers to end the occupation as soon as possible. It is interesting for many sectors. The balance of political power in Iraq has to be changed. We have to set up a secular political power and not political islamists, which is mainly the composition of the Government today. We must have a different model, one of social prgress and we have here real potential for the working classes to organise Iraqi society on a secular and progressive basis, polarising around the workers’ interests, creating a fair society which brings benefits to all.

We need support to set up a humanitarian model, an internationalist movement and a secular society which constitutes a viable alternative, first in Iraq. It is time for a New Left to intervene.

Our thanks to the sponsor, SPGL