A former Reagan official has issued a public warning that the Bush administration is preparing to orchestrate a staged terrorist attack in the United States, transform the country into a dictatorship and launch a war with Iran within a year. 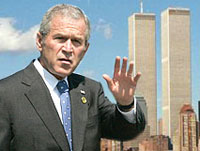 Paul Craig Roberts, a former Assistant Secretary of the Treasury, blasted Thursday a new Executive Order, released July 17, allowing the White House to seize the assets of anyone who interferes with its Iraq policies and giving the government expanded police powers to exercise control in the country.

Roberts, who spoke on the Thom Hartmann radio program, said: "When Bush exercises this authority [under the new Executive Order], there's no check to it. So it really is a form of total, absolute, one-man rule."

"The American people don't really understand the danger that they face," Roberts said, adding that the so-called neoconservatives intended to use a renewal of the fight against terrorism to rally the American people around the fading Republican Party.

Old-line Republicans like Roberts have become increasingly disenchanted with the neoconservative politics of the Bush administration, which they see as a betrayal of fundamental conservative values.

According to a July 9-11 survey by Ipsos, an international public opinion research company, President Bush and the Republicans can claim a mere 31 percent approval rating for their handling of the Iraq war and 38 percent for their foreign policy in general, including terrorism.

"The administration figures themselves and prominent Republican propagandists ... are preparing us for another 9/11 event or series of events," he said. "You have to count on the fact that if al Qaeda is not going to do it, it is going to be orchestrated."

Roberts suggested that in the absence of a massive popular outcry, only the federal bureaucracy and perhaps the military could put constraints on Bush's current drive for a fully-fledged dictatorship.

"They may have had enough. They may not go along with it," he said.

The radio interview was a follow-up to Robert's latest column, in which he warned that "unless Congress immediately impeaches Bush and Cheney, a year from now the U.S. could be a dictatorial police state at war with Iran."

Roberts, who has been dubbed the "Father of Reaganomics" and has recently gained popularity for his strong opposition to the Bush administration and the Iraq War, regularly contributes articles to Creators Syndicate, an independent distributor of comic strips and syndicated columns for daily newspapers, RIA Novosti reports.

Today we can come across a large number of different theories of World Trade Center collapse. The following is one of the latest and most interesting.

Architects and Engineers are trained to design buildings that function well and withstand potentially destructive forces. However, the 3 high-rise buildings at the World Trade Center which "collapsed" on 9/11 (the Twin Towers plus WTC Building) presented us with a body of evidence (i.e.controlled demolition) that was clearly outside the scope of our training and experience.

In addition, the shock that hit us on that date from the repeated attacks and staggering loss of life has limited our ability to rationally evaluate what really happened. We therefore found ourselves relying solely upon the judgment of outside "experts"... and, quite willing to, "go along" with the collective myth that has unfolded: that "the buildings failed structurally due to the aircraft impacts and resulting fires".

After all, we saw the aircraft slam into the building, the resulting huge fireball, and the ensuing "collapses".

There is however a growing body of very solid evidence regarding these "collapses" that has emerged in the last couple of years - gaining ground even in the mainstream media. This new evidence casts grave doubt upon the theories of the 9/11 building collapse "experts" as well as the official reports by the 9/11 Commission, FEMA, and NIST.

It lays out a solid convincing case which architects & engineers will readily see: that the 3 WTC high-rise buildings were destroyed by both classic and novel forms of controlled demolition.

After all, if in fact these buildings were professionally demolished with explosives, and since it takes months of planning and engineering to place the explosives, and since these buildings were highly secure from the likes of terrorists, then we are presented with a horrible conclusion that we can not deny: that this entire event could only have been planned and orchestrated by some element(s) within the U.S. Government, ae911truth.org reports.

Author`s name Alex Naumov
15:17
Armed Forces of Ukraine drop chemical bombs from drones - DPR governor
14:59
Russian Olympic ice dancing champion develops gangrene of his leg
18:54
Ukrainian soldier uses chainsaw and fire to release US howitzer from ice trap
18:30
Onet: Ukraine will lose in six months due to shell shortage
17:36
Russian troops defeat Ukrainian troops in Zaporizhzhia region
14:50
Number of foreign mercenaries in Ukraine continues growing
14:17
Russians buy more than 50 tons of gold in 2022
13:57
Russia will not talk to Ukraine. Russia will talk to the West
13:34
USA's plan to give 20 percent of Ukraine for peace hoax
12:51
Medvedev: Ukraine as a state to be devastated, go bankrupt and be turned into colony
Drone with large air bomb on board explodes over Kaluga in western Russia