Being unable to put out the Iraqi fire, U.S. President Bush is frantically looking for a scapegoat. Bush’s latest surprise visit to Iraq will not yield any results. His visit is aimed at impressing Congress and shifting the blame for the mess to the Iraqi authorities. 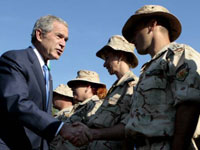 President Bush made a surprise visit to Iraq on Monday. He was accompanied by Secretary of State Condoleezza Rice and National Security Adviser Stephen Hadley. Top U.S officials landed in Al Asad Air Base, a heavily fortified American post in Anbar province. Defense Secretary Robert Gates visited Iraq several days earlier. Having spent a few hours in Iraq, Bush flew to Australia for an economic conference to be held on September 8-9.

It was the third unannounced visit of U.S. president to Iraq in four years. Bush previously visited the country in 2003 and 2006.

Bush’s visit was shrouded in a veil of secrecy, which looks rather out of place for a proprietor inspecting his possessions. All in all, the proprietor resembles a fireman who is shirking his principal duty. Saving his own skin is his biggest concern now.

One could see the full set of propaganda clichés being put to use during Bush’s latest trip to Iraq. The president delivered a 15-minute speech to U.S. troops to ensure a strong bond between the chief of state and the people. Then Bush had a meeting with Iraqi Prime Minister Nouri al Maliki, a “good guy” the Washington would trade for somebody else in case there were candidates to choose from.

Taking into account that Bush is to deliver a status report on Iraq to Congress next week, Bush’s mission was primarily aimed at persuading Congress that the president is busy tackling the problem on site, and he is putting on a bold front in an attempt to spread democracy far and wide. In other words, the president is purportedly making great effort to get the job done in Iraq as lawmakers on the Hill are laying a trap for him in total disregard of wishes of the American people.

What will be the results of Bush’s latest visit to Iraq? Basically, there will be no results whatsoever. The proprietor is busy pondering ways to evade criticisms in Congress and secure an additional $50 billion bill for the Pentagon to pay for military operations in Iraq.

Back in January this year, the president ignored a sobering piece of advice of the experts who recommended him to reduce the number of troops and scale down their mission in Iraq. Bush made a different decision instead. He decided to build up the U.S. military presence in Iraq, increasing the number of troops to roughly 160,000. Bush also ordered the U.S. forces to intensify combat operations across Iraq (mostly in Baghdad). He promised that the “surge” of more troops would result in gradual progress.

Enough hard evidence came to light over the last six months to prove that the “surge” was a highly risky undertaking. More Iraqi civilians were killed, and occupying forces suffered heavier casualties. The move did not bring out any improvement of the military and political situation in Iraq, by and large.

The White House could not but use the Maliki government as a scapegoat under the circumstances. It is the Iraqi government that is now supposed to get the blame for the U.S. policy that proved to be a complete bungle.

Bush’s visit is a ritual act designed to prompt a change in the current Iraqi leadership, which should be replaced by members of a more pliable and less independent Sunni community.

On the one hand, a Sunni government will counterbalance Iran-oriented Shiite community. On the other hand, the Sunnis will be dependent on the U.S. forces in terms of security. Besides, the Sunnis will be eagerly participating in the division of Iraq provided that they receive control over the main oil resources in southern part of the county. Should the scenario become a reality, Bush will probably succeed in making use of the bloody game to advantage. However, the Sunni project may as well be the last chance for Bush to change the situation.