As the U.S. military struggles to keep up troop levels with the ongoing war on terror, the Army is now offering potential recruits $20,000 if they agree to ship off to basic training almost immediately. 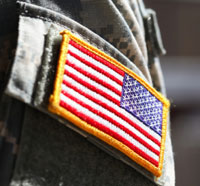 Typically, there's about a 40-day wait between when someone enlists and when they are shipped to basic training. But if recruits opt for the Army's new Quick Ship signing bonus, they are off to boot camp within a couple of days and $20,000 richer, WPDE reports.

Army officials declined to discuss the August numbers, pending an official Defense Department announcement that normally comes on the 10th of the month. Maj. Gen. Thomas Bostick, head of the U.S. Army Recruiting Command, told reporters at the Pentagon yesterday that he could not reveal the August total, saying only: "We had a very good month of August."

It was good for the Army in part, Bostick said, because of the success of the quick-ship bonus, which has been available to almost all new recruits since July 25 and may have encouraged people who were "on the fence" about joining the Army to enlist in recent weeks. He said it is possible that the Army will extend the bonus.

According to Army recruiting data for late July and early August, the quick-ship bonus was extremely popular, with more than 90 percent of new recruits accepting the money in exchange for leaving their homes almost immediately. Bostick said that about 400 recruits who had been scheduled to leave in September opted instead to leave last month to pocket the bonus.

Bostick said many "future soldiers" would normally leave for basic training within 30 days of signing their contracts. Quick-ship bonuses traditionally have been offered only to select candidates for jobs the Army is looking to fill, but enlistments have risen since the bonus was offered to nearly everyone, Bostick said. He also knocked down the idea that new recruits are being rushed off to war, washingtonpost.com reports.

Other programs that have boosted recruiting in the fourth quarter of this year include a $15,000 bonus and education benefits in exchange for two-year enlistments.

The incentives have more than doubled the number of people who sign up to serve for two years, Bostick said. So far this year, 800 recruits signed up for two-year terms, and he expects to finish the year with 200 more. The average is 300 to 400 people, armytimes.com reports.