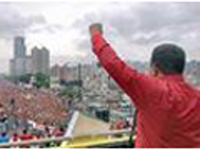 5.000 Dragunov sniper rifles to be ordered by President Hugo Chavez to protect Venezuela from an eventual invasion by the USA: “We will knock out any imperialist that approaches”.

President Hugo Chavez of Venezuela stated on Sunday night that Venezuela is to order 5.000 Russian Dragunov sniper rifles, calling them “The best in the world” and promising “We will knock out any imperialist that approaches”.

In 2006, Venezuela purchased 24 Sukhoi fighter aircraft and 100.000 Kalashnikov AK-103 assault rifles to add to an order book including helicopters and now, submarines.