America continues to lose its men in Iraq, Bush promises no pullout during his presidency 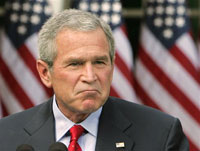 America continues to lose its men in Iraq, Bush promises no pullout during his presidency

"I support him," Bush said a day after he acknowledged frustration with the Iraqi leader's inability to bridge political divisions in his country. "It's not up to the politicians in Washington, D.C., to say whether he will remain in his position. It is up to the Iraqi people who now live in a democracy and not a dictatorship."

Bush's validation of al-Maliki, inserted at the last minute into his speech to the Veterans of Foreign Wars convention, stole the spotlight from Bush's attempt to buttress support for the war by likening today's fight against extremism to past conflicts in Japan, Korea and Vietnam, the AP says.

Bush had appeared on Tuesday to be distancing himself from the Iraqi leader when he said at a North American summit in Canada: "Clearly, the Iraqi government's got to do more." The White House denied Bush was backing away from al-Maliki, but it was lukewarm validation compared with Bush calling al-Maliki "the right guy for Iraq" last November in Jordan.

Al-Maliki, on a trip to Syria, quickly lashed back at U.S. criticism. He said no one has the right to impose timetables on his elected government, and that Iraq can "find friends elsewhere." Without naming any American official, al-Maliki said some criticism of him and his government in recent days had been "discourteous."

The president's speech - and another one like it next Tuesday - are intended to set the stage for a crucial report next month on the progress of the fighting and steps toward political reconciliation in Iraq. Democrats in Congress and some Republicans are pressing to start the withdrawal of U.S. forces.

In an attempt to prove that the presence of U.S. forces in Iraq is justifiable, Bush said: "Our troops are seeing this progress that is being made on the ground. And as they take the initiative from the enemy, they have a question: "Will their elected leaders in Washington pull the rug out from under them just as they're gaining momentum and changing the dynamic on the ground in Iraq?"

Comparing Iraq with earlier wars, Bush said, "The question now before us comes down to this: "Will today's generation of Americans resist the deceptive allure of retreat and do in the Middle East what veterans in this room did in Asia?"

President George Bush sought to buy more time for his Iraq "surge" strategy yesterday by making a risky comparison for the first time with the bloodshed and chaos that followed the US pullout from Vietnam.

Making it clear he will resist congressional pressure next month for an early withdrawal, he signalled that US troops, whom he hailed as the "greatest force for human liberation the world has ever known", will be in Iraq as long as he is president. He also said the consequences of leaving "without getting the job done would be devastating", and "the enemy would follow us home".

In a speech to army veterans in Kansas City, Mr Bush invoked one of the US's biggest military disasters in support of keeping troops in Iraq: "One unmistakable legacy of Vietnam is that the price of America's withdrawal was paid by millions of innocent citizens whose agonies would add to our vocabulary new terms like 'boat people', 're-education camps' and 'killing fields'."

The speech was aimed primarily at what White House officials privately describe as the "Defeatocrats", the Democratic congressmen trying to push Mr Bush into an early withdrawal, The Guardian reports.

The Bush administration wants to keep the surge going until at least next April, at which point the overstretched military will be forced to begin reducing troop numbers anyway.

In the meantime, America continues to lose its citizens in Iraq. The latest news came today from a California-based family that lost its second son in the war-torn country. The young man, Spc. Nathan Hubbard, 21, was one of 14 U.S. soldiers killed in a Black Hawk helicopter crash on Wednesday. The family of Spc. Nathan Hubbard, 21, was taking his death "very, very hard," said police spokeswoman Janet Stoll-Lee. The soldier's father, Jeff Hubbard, is a retired 30-year veteran of the police department.

Nathan's older brother, Marine Lance Cpl. Jared Hubbard, died in a roadside bomb explosion in downtown Ramadi in 2004. A third brother, Jason, will be returning home from Iraq to be with his family, Stoll-Lee said on behalf of the Hubbards.

Nathan and Jason Hubbard joined the Army together in 2005, shortly after their brother was killed. Their mother, Peggy, told the Fresno Bee newspaper in a 2005 interview that she believed Jason joined in part to protect Nathan after not being there to help Jared.