The inauguration of the first president of indigenous origin in Bolivia appears to have revived the spirit of integration in South America after months of conflicts between neighbour nations. Presidents of Argentina, Brazil, Chile, Colombia, Panama, Peru, Paraguay and Venezuela attended in La Paz to Evo Morales' ceremonies and vowed for the integration of the peoples. 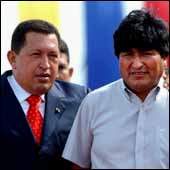 As presumably expected, the first one to insist in the necessity of promoting the regional integration “to fight imperialism and capitalism” was Hugo Chavez. The flourished rhetoric of the Venezuelan leader could be heard minutes after his plane arrived in the international airport of El Alto, 15 minutes uphill from the Bolivian capital.

“I celebrate Evo's victory because he will join us in the fight against (US) imperialism and capitalism”, said Chavez to reporters. “Capitalism is death. We need to replace it by a new socialism, but not socialism imported from the Soviet Union; I am talking about a genuine Latin American socialism of indigenous basis”, remarked the Venezuelan president who signed on Monday a number of cooperation agreements with Evo Morales oriented to reduce illiteracy in Bolivia.

In a brief dialogue with Pravda.Ru in La Paz, the Brazilian President Luiz Inacio Lula Da Silva remarked Evo's victory not only as “a new era for the Bolivian people”, but also a “great advance for the leftist movements across Latin America.” Brazil and Argentina have recently gone through a number of commercial conflicts within the Mercosur bloc, which also comprises Paraguay and Uruguay.

Peru's president Alejandro Toledo also talked to Pravda.Ru about Evo's inauguration and its meaning for the regional integration. “This is a great moment for Bolivia and also a democratic 'fiesta' for Peru”, said Toledo, who is not included in the club of leftist rulers in Latin America.

Chile's socialist Ricardo Lagos paid an important visit to Bolivia, taking into account that both countries have along running dispute over the former Bolivian coastline in Chilean control since the Pacific War of 1879. Fellow socialist Morales thanked Lagos for the gesture, as promised to visit Chile to also socialist Michelle Bachelet's inauguration scheduled for March.

The centrist president of Panama, Martin Torrijos, son of the popular Panamanian leader Omar killed by a CIA plot in 1981, also took part in the celebrations. In response to a question of Pravda.Ru at the Bolivian Palace of Government, Martin said: “My father would have been very proud of the brave Bolivian people”.

Only two South American leaders remain silent on Evo's inauguration. Argentina's Nestor Kirchner – who briefly visited La Paz - and Uruguay's Tabare Vazquez, who opted to remain in Montevideo. While Kirchner’s last moves appear not to go in the direction of a progressive administration, Vazquez is very angry with Kirchner over the opposition of Buenos Aires to the construction of two Uruguayan paper factories in the border with Argentina.