“How long are we going to allow a person, from any country in the world, to come to our own house to say there's a dictatorship here”, he said. 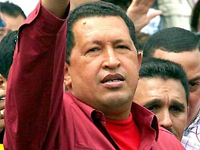 Angry with a Mexican politician that harshly criticized him in Caracas, the Venezuelan President Hugo Chavez studies measures to deport foreign citizens that publicly criticize his government. According to news reports from the Caribbean nation, Chavez ordered officials to monitor statements made by international figures visiting the country.

Apparently, Chavez went furious after the President of Mexico’s ruling conservative party (PAN), Manuel Espino, criticized Chavez for seeking to do away with term limits at a recent “pro-democracy” conference in Caracas. "No foreigner, whoever it is, can come here to attack us," Chavez replied. "How long are we going to allow a person, from any country in the world, to come to our own house to say there's a dictatorship here, that the President is a tyrant, and no one does anything about it?".

According to the local opposition newspaper, El Nacional, Chavez will ground eventual deports on a 1942 law that also bans praise from foreigners. According to the newspaper, the law prohibits foreigners from advocating any political position, negative or positive, while in Venezuela, calling into question comments made by dozens of visiting Chavez allies who laud his policies.

Venezuelan Foreign Minister Nicolas Maduro meanwhile sent Japan a formal complaint protesting comments by outgoing Ambassador Yasuo Matsui that he said constitute ``interference'' in internal Venezuelan affairs. Maduro told state television on Tuesday that Venezuela was angered by Yasuo Matsui's interview in the El Nacional newspaper in which he appeared to question a decision that forced Radio Caracas Television, or RCTV, off the air May 27.

"The national government believes the mentioned statements constitute an unacceptable interference by Japan's top diplomatic representative," said Maduro, adding a letter of protest was sent to Masui. "We don't accept that anybody, from any government ... meddle in domestic affairs."

Asked about RCTV's removal, Matsui was quoted in the newspaper on Monday as saying: "Venezuelan society should ask how laws are established that permit such situations." Matsui also suggested that Japan was more socialist than Venezuela under Chavez because the gap between the rich and poor in the Asian nation is narrower than in the South American country.