As a result of an usually severe flood season, over two billion mice have swarmed and are now destroying crops in 22 counties in PR China. The invasion began on June 23 when the Yangtze River flooded, raising the water level in central China's Dongting Lake. 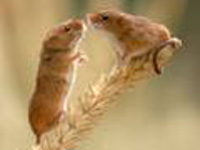 Mice holes became flooded, causing the rodents to tunnel through the dikes and spread out into fields, eating crops and posing a direct health hazard of crisis proportions to humans.

Mice often carry viruses and bacteria that cause disease in humans. These pathogens can be transmitted to people by various routes. The most frequent route is through the bite of an infected rodent flea because these will seek another host to feed on after the rodent dies. Therefore, the fleas will need to be controlled.

Diseases can also be transmitted by direct contact with mice, their urine, feces or nesting material. An outbreak of typhus could possibly result. Before the discoveries of modern medicine, plague often occurred as a result of rodent infestations. It is usually recommended to reduce available food and water and remove fallen fruit promptly, but current conditions make this next to impossible.

Walls and ditches were constructed to keep the mice out, but they have already damaged dikes and ruined crops in areas where the authorities had delayed construction, according to Xinhua Chinese News Agency. In Anhui Province, officials are planning to deliberately flood 75 villages near Fuyang in order to relieve pressure on the steadily rising and highly polluted Huai River.

Local residents have already killed more than 2.3 million field mice, which is roughly equivalent to 90 tons of the rodents. The residents were using clubs and shovels to beat them to death, while others scooped the prolific and destructive rodents out with their fishing nets.

People's Daily reported 101 flood-related deaths in six provinces so far this summer. The crisis was expected to get worse as more floods have been forecast for the upper reaches of the Yangtze River and Dongting Lake.