A police officer had found a bag with $ 64,000 in her office toilet a month ago. 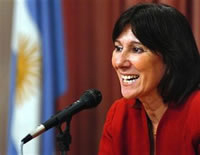 The Argentine Government accepted on Monday the resignation of the Economy Minister, Felisa Miceli, who had to step down after a federal prosecutor requested her over a corruption scandal. During a routine search of the premises three weeks ago, a police officer found $ 64,000 in her office toilet and Miceli failed to explain how the money got there.

Miceli first told that she had hidden the money there as she was ready to buy a house for her daughter. At that time, she had said that the money belonged to her. Later, she said that the she had borrowed the money from her brother, a businessman.

Despite Ms Miceli's explanation that the money was for a down payment for a house, the prosecutor said he had "gathered enough evidence" supporting the suspicion Ms Miceli "failed to abide by her duties as a public official". He also said the minister was suspected of destroying public documents and of a cover.

Part of the money –100,000 Argentine pesos- was sealed and registered by the Argentine Central Bank. As the Central Bank of Argentina does not have retail customers, it became clear that her brother could not have lent the money to her.

Prosecutors found out that the money had been withdraw from a retail lendings house, which was being investigated by local courts over money laundering. As Miceli had commented to the press that she was ready to save the money in an official bank, prosecutors believe she could be punished for money laundering, according to local laws.

Ms Miceli, 53, is the first member of President Nestor Kirchner's cabinet to be smeared by corruption allegations. She said she believed the controversy has been trumped up to influence the October 28, 2007 presidential election in which Mr Kirchner's wife is a candidate.

"It's a political attack, not against me, but against the government during a political year," she said after the scandal broke. Ms Miceli, who took over her post at the end of 2005, said that she also has made many political enemies during her tenure who could be eager to get rid of her.

Ms Miceli will be replaced in office by Mr. Miguel Peirano, who is the current Secretary of Industry. Peirano will be in office until December when President Kirchner finishes his term, as he is not seeking for his reelection.