From the imposing Atacama Desert in the north to the inspiring iced peaks in the far south of the country – and the world - Chile, the most stable economy of Latin America, prepares for the final battle between the continuity of the 16-year rule of the centre-left Concertacion and a turn to the right. With one week to go, socialist presidential candidate Michelle Bachelet maintains a strong lead over the conservative tycoon Sebastian Pinera, but about 30% of Chilean polled are still undecided ahead of Sunday elections. 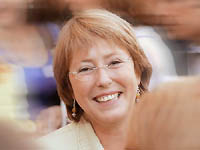 According to opinion polls published by the local media after the TV debate aired last week, Mrs. Bachelet is close to become the first female president, as she has 41 percent of the vote, while Pinera has almost 30 percent of the voices. With another 30 percent of undecided Chileans, the runoff is far from being an easy journey for Bachelet but Pinera will have to make big efforts to frustrate the former minister of Defense in the incumbent administration of fellow socialist Ricardo Lagos.

All along this 5,000 kilometres-long narrow country stuck between the Pacific Ocean and the Andes Mountains, Chileans are very much involved in what has became into a new battle between the left and the right. Nonetheless, Chileans are optimistic about their future as neither Bachelet nor Pinera have proposed to change the fundamentals of the national economy.

While Bachelet aims to make of Chile a more equal country by reforming the pension funds system and strengthening public benefits, Pinera has a more pro-market speech to increase the nation's competitiveness in the world. Chile's current bonanza depends mostly on the good prices of the copper and other commodities this country exports.

“If Bachelet wins, the communists will win,” Ramon, a 53-year-old taxi driver, tells Pravda.Ru in the noisy Pacific port of Valparaiso, some 150 kilometres north of Santiago. “The Russians want Bachelet to win because she is a communist. I'll vote for Pinera”, surprisingly argues Ramon, as he drives his Lada through the hills of this colourful inspiring town which still remember its best times in the late 1880’s. “This car is the best for climbing up these hills”, admits Ramon who has proved not to love Russians a lot.

“Pinera is the son of the devil!” cries Maria, a 56-year-old housewife in La Serena, the Chile's second oldest city 500 kilometres north of Santiago. “I didn't want to vote because I don't like politics, but I am afraid the right could win,” she adds as argues: “They – former dictator Pinochet and his right-wing followers - tortured and killed our people and Pinera used to admire Pinochet but no says he was a bad ruler.”

Photo: Bachelet came first in the first round of the election on December 11 with 45.9 percent. She would have needed more than 50 percent to avoid going to a second round on January 15.