The doctors say Sharon will undergo a CT scan on Saturday morning to determine if the massive cranial bleeding he suffered after Thursday's stroke has completely stopped. Doctors say, however, that Sharon is not likely to recover fully. 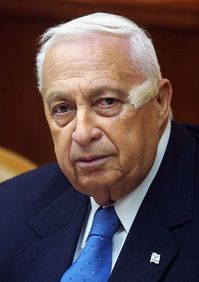 The apparent end of the Sharon era in Israel removes both the single most important individual driving events in the highly volatile corner of the world and the man embraced by President Bush as the best chance for settling the conflict that has raged for more than half a century. Even if Mr Sharon survives this latest health scare, he is not expected to be part of the political equation in Israel.

In the wake of Sharon's life-threatening illness, the Bush administration suddenly faces a landscape loaded with questions and an unexpected new concern: the danger of a power vacuum in Israel at a time the Palestinian leadership is itself weak and ill-organized.

Iranian President Mahmoud Ahmadinejad said he wished Sharon was dead and said he hoped the rest of the Jewish state's leaders would join him. But most other world leaders had kinder words to say about 77-year-old Sharon. United Nations Secretary General Kofi Annan said he was deeply concerned about Sharon's health, while US President George Bush said he was a strong man who had a vision for peace. Russian President Vladimir Putin has wished Sharon a speedy recovery and French President Jacques Chirac praised what he called Sharon's "courageous initiatives".