Cindy Sheehan, the soldier's mother who galvanized the anti-war movement, said Sunday that she plans to seek House Speaker Nancy Pelosi's congressional seat unless she introduces articles of impeachment against President Bush in the next two weeks. 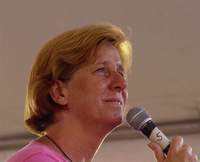 Sheehan said she will run against the San Francisco Democrat in 2008 as an independent if Pelosi does not seek to impeach Bush by July 23. That's when Sheehan and her supporters are to arrive in Washington, D.C., after a 13-day caravan and walking tour starting next week from the group's war protest site near Bush's Crawford ranch.

Pelosi spokesman Brendan Daly said the congresswoman has said repeatedly that her focus is on ending the war in Iraq.

"She believes that the best way to support our troops in Iraq is to bring them home safely and soon," Daly said in an e-mail. "July will be a month of action in Congress to end the war, including a vote to redeploy our troops by next spring."

The White House declined to comment on Sheehan's plans.

Sheehan announced in late May that she was leaving the anti-war movement. She said that she felt her efforts had been in vain and that she had endured smear tactics and hatred from the left and right. She first came to Crawford in August 2005 during a Bush vacation, demanding to talk to him about the war that killed her son Casey in 2004.

Sheehan, who will turn 50 on Tuesday, said Bush should be impeached because she believes he misled the public about the reasons for going to war, violated the Geneva Conventions by torturing detainees, and commuted the prison sentence of former vice presidential aide Lewis "Scooter" Libby.