Ex-Prime Minister of Great Britain Tony Blair has been appointed a special envoy to the Mideast “Quartet”. The idea can hardly be qualified as popular in the Arab world as Blair is known for his support of USA’s Iraqi campaign and the American attack against Lebanon. That is why it is quite natural that Russia may act an influential mediator in the region. 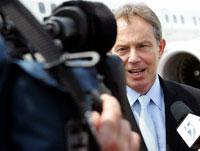 On the eve of Blair’s official resignation political commentators insisted that he would be appointed a special envoy to the Mideast region. But in fact the situation has turned out to be not that easy as was expected.

On Wednesday, news agencies reported that appointment was postponed allegedly because of Russia’s protests in this connection. And nothing definite about the appointment was said all day long Wednesday. Finally, it was just in the evening clear that the ex-prime minister of Great Britain was appointed to his new position.

No matter why the uncertainty emerged, many experts doubt that Tony Blair may be an effective negotiator in the Middle East.

The Mideast “Quartet” consisting of the USA, United Nations, European Union and Russia is a structure working on Mideast peace settlement for several years already. And it is certainly a serious authority and has influence upon everything that is going on in the Middle East. Basically, Moscow has taken much effort to bring the conflicting parties to talks and avoid further bloodshed.

Actions of the Russian Federation in the framework of the organization are quite agreeable for the Arab world, while what other three members do is a constant anxiety for them. The Middle East considers the US a sponsor of Israel and treats all American suggestions in an obviously unfriendly way. And the Iraqi war makes the Arab world even more suspicious about America’s doings.

However, the European Union does not enjoy trust of Arabs. EU member countries participate in the campaigns in Afghanistan, Iraq and take an active part in blackmailing Iran. So, the Arab world is definitely scared that something of the kind can be done on their territories as well.

Many people believe that the United Nations was the organization that failed to stop Washington and consequently allowed the Iraqi tragedy break out.

So, taking into consideration the attitude toward the US, EU and United Nations, Russia seems to be remaining the only effective negotiator in the Middle East.

And this fact is quite likely against the background of the visit of Russia’s Foreign Minister Sergey Lavrov to Jerusalem the day when the Mideast “Quartet” had a session. A day before the visit, Israel, the Palestinian autonomy, Jordan and Egypt had a summit on Mideast settlement either.

Sergey Lavrov suggested that a large-scale conference on Middle East settlement should be held with participation of all parties of the conflict including the political wing of Hamas notwithstanding the fact that the Mideast “Quartet” wants to isolate it. Moscow’s stand also contradicts the basic agreement achieved at a recent top-level meeting in Egypt and the ideas of the world leading powers. Leading countries of the world think that it is important to keep on isolating Hamas in Gaza Strip; they insist that it makes sense negotiating with Fatah only and its leader Abbas on the West Bank of Jordan.

Russia ’s foreign minister allows that “someone probably does not want Palestine get united again; and they may try to wage a civil war in Palestine with the view of putting an end to the entire movement of Hamas.” At that, Sergey Lavrov emphasizes that Moscow thinks unity of the Palestinian autonomy the obligatory condition for the success of the peace settlement process.

The statement has had a response in Tel-Aviv. The Israeli Foreign Ministry said that their opinion as concerning organizing a conference has not changed; they do not object to the conference but seriously believe it does not make sense organizing it at the moment present. A spokesperson for the Israeli Foreign Ministry said that first of all it was particularly important to make the situation in the region stable and then start realization of new ideas. He added that Israel would insist on the necessity to strengthen the Palestinian moderate forces.

Amidst the serious struggle the idea of appointing Tony Blair an envoy to the Middle East may be strongly criticized. To many it sounds incredible that a political leader who approved of bringing forces to Iraq, who supported the Israeli aggression in Lebanon is now appointed a peace-maker to the region where together with other politicians he has caused terrible bloodshed.

It was the US’s initiative to appoint Blair a negotiator to the Middle East. It is not ruled out that Blair is sent there as a person to fulfill a destructive mission in the Middle East and make so that war and confrontation could never end there.