Venezuelan President Hugo Chavez has urged soldiers to prepare for a guerrilla-style war against the United States.
He said the US government is using psychological and economic warfare as part of an unconventional campaign aimed at derailing his government. 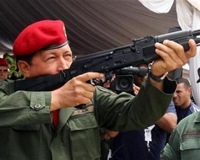 Dressed in olive green fatigues and a red beret, Chavez spoke yesterday inside Tiuna Fort – Venezuela’s military nerve-centre – before hundreds of uniformed soldiers standing alongside armoured vehicles and tanks decorated with banners reading: “Fatherland, Socialism, or Death! We will triumph!”

“We must continue developing the resistance war, that’s the anti-imperialist weapon. We must think and prepare for the resistance war everyday,” said Chavez, who has repeatedly warned that American soldiers could invade Venezuela to seize control of the South American nation’s immense oil reserves.

US officials reject claims that Washington is considering a military attack. But the US government has expressed concern over what it perceives as a significant arms built-up here, irishexaminer.com reports.

Under Chavez, Venezuela has recently purchased some $3 billion worth of arms from Russia, including 53 military helicopters, 100,000 Kalashnikov rifles, 24 SU-30 Sukhoi fighter jets.

Last week, Chavez said he is considering arms purchases, including submarines and a missile-equipped air defense system, as he prepares for a tour of Russia, Belarus and Iran.

“We are strengthening Venezuela's military power precisely to avoid imperial aggressions and assure peace, not to attack anybody,” he said Sunday.

Opposition leader Julio Borges condemned the president's interest in acquiring weapons, saying the government should focus on reducing violent crime in Venezuela, which has one of the highest homicide rates in Latin America, the AP reports.

Venezuelan leader Hugo Chavez travels this week to Iran, Russia and Belarus -- all countries which have found themselves at loggerheads recently with the United States, his longtime nemesis.

Chavez departs Tuesday for his week-long tour, from June 26 to July 3, defiantly insisting that he will purchase Russian submarines and possibly an air defense system from Belarus, despite vocal objections from Washington.

Chavez, who views himself as Bush's arch-enemy, will be cultivating relations with each of the regimes, in an apparent bid to drive an even deeper wedge with between the United States and its adversaries.

Each of the countries on Chavez's itinerary has locked horns with Washington in recent weeks over conflicts that have yet to be resolved.

Chavez has said he hopes to put the "finishing touches" on an agreement to purchase from Belarus an integrated air defense system with a 200-300-kilometer range (125-200 miles).

Relations between Russia and the United States, meanwhile, are at a post-Cold War low due to political and security differences.

Specifically, Moscow and Washington have traded barbs about a US plan to place interceptor missiles in Poland and elements of a linked radar system in the Czech Republic.

Bush will welcome Russian President Vladimir Putin to his family's compound in Kennebunkport, Maine on July 1 and 2 -- on the heels of Chavez' visit to Moscow -- in an effort to smooth over differences.

Flush with petrodollars, Chavez said last week he might purchase some Russian submarines when he meets with Putin -- a deal observers said could chill the planned Putin-Bush summit.

Media reports in Moscow this month said Chavez wanted to buy as many as nine submarines to protect shipping lanes for key oil exports, AFP reports.