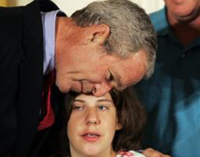 Bush followed his veto -- his third since becoming president -- with an executive order aimed at encouraging federal agencies to support research that offers the promise of creating medically useful stem cells without destroying human embryos.

In his veto message to Congress, Bush said the legislation crossed an ethical line. "The Congress has sent me legislation that would compel American taxpayers, for the first time in our history, to support the deliberate destruction of human embryos," Bush said.

The veto came under attack from those who say the president is withholding critical support for the most promising forms of stem cell research to appease conservative Christians and other supporters who equate human embryos with human lives, the Washington Post reports.

Embryonic stem cells are the source of every cell, tissue and organ in the body. Scientists study them to understand the biology not only of disease, but of life itself, and want to use them to transform medicine and find cures for such debilitating illness as Parkinson's, cancer and diabetes.

In addition to vetoing such legislation for the second time in two years, Bush issued an executive order to encourage scientists to work with the federal government to derive new methods to obtain stem cells without harming human embryos. He announced no new funding.

The Campaign for the Advancement of Medical Research, a lobby group made up of medical and advocacy groups, called the executive order a sham.

"The new approaches addressed by the order are still in the early stages of development and appear to already be eligible for National Institutes of Health funding," the group said in a statement.

Polls show the stem-cell bill is backed by more than 60 percent of American voters.

"Once again, the president has ignored the will of the American people, of leading medical researchers, and of a bipartisan majority of the Congress," said House Speaker Nancy Pelosi, a California Democrat.

Republican Senator George Voinovich of Ohio backed Bush, saying, "We can and must find cutting-edge techniques to cure disease and ease suffering without destroying life."

Shortly after Bush took office in 2001, he allowed federal funding on 78 stem cell lines then in existence. Most are now of limited use to scientists, who have urged the president to lift his restrictions, Reuters reports.

Bush urged support of legislation sponsored by Sen. Norm Coleman, R-Minn., which passed the Senate but has not yet been taken up by the House. Coleman says his measure supports federal funding for embryonic stem cell research methods that do not harm embryos. “It provides for ethically responsible stem cell research sooner rather than later,” Coleman said.

Bush said his executive order directs the Health and Human Services Department to promote research into cells that - like human embryonic stem cells - also hold the potential of regenerating into different types of cells that might be used to battle disease and make them eligible for federal funding.

“Destroying human life in the hopes of saving human life is not ethical, and it is not the only option before us,'' said Bush, who appeared on stage with Kaitlyne McNamara of Middletown, Conn., who was born with spina bifida, and is benefiting from what he called “ethical stem cell research.”

Sean Tipton, president of the Coalition for the Advancement of Medical Research, expressed anger and disgust at the veto and Bush's order, the AP reports.