The annual report of the respected Stockholm International Peace Research Institute (SIPRI) has said that world military spending had risen by 37 percent in the last 10 years to US$1.2 trillion - a trend that was largely led by the United States of America. It also said that this trend was unlikely to taper off soon. 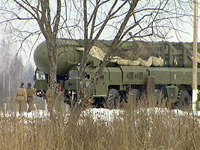 The SIPRI's annual report also said that global military expenditure in 2006 was up 3.5 percent from 2005, and had increased 37 percent overall since 1997.

It also said that the United States accounted for 46 percent of the spending last year ($528.7 billion), and was responsible for 62 percent of the total increase. "The increase in US military spending has to a large extent been driven by supplemental allocations for those operations and policies associated with the 'global war on terrorism'," the institute said.

According to SIPRI, Central Asia was the region that recorded the highest increase over a 10-year period from 1997-2006, registering a 73 percent rise. However, SIPRI qualified this observation by saying that the estimate was "somewhat unreliable" due to the lack of data for certain countries.

Russia, the fourth largest spender in Europe, increased its expenditures by almost 12 percent last year, building further on a 19 percent increase in 2005.

"Since the start of this increasing trend in 1998, Russia's spending has increased by 155 percent," SIPRI said. It, however, noted that changes to Moscow's budgetary system made it difficult to follow exact movements in the trend.

The institute also noted that expanding financial resources were driving the upward trend. It said that China, whose defence spending exceeded Japan's for the first time last year, was "the prime example of a country where a booming economy, amongst other factors, has allowed a steep rise in military expenditure".

The report went on to say that there seemed to be "little chance of there being a rapid decline in world military expenditure, which could allow governments to give higher priority to social expenditure."

It predicted that the upward trend was "unlikely to be reversed while the world's largest military spender remains at war".

SPIRI said that sales by the world's 100 largest weapons manufacturers rose by three percent in 2005, to $290 billion, a trend spearheaded by the US.

It also said that American companies, and those in Western Europe, dominated the institute's Top 100 list, together accounting for 92 percent of arms sales in 2005, the latest year for which figures are available.

"Companies use mergers and acquisitions to achieve economies of scale, but the increased concentration of production can also lead to reduced competition and thus remove incentives to keep prices down and innovation up."

Four US companies increased their sales by more than $1 billion in 2005: L-3 Communications, Raytheon, Northrop Grumman and General Dynamics. The same was true for one British company, BAE Systems, and one Italian, Finmeccanica.