Great Britain becomes an Islamic state. According to the United Kingdom Office for National Statistics, the name Muhammad has become the second most popular name among male newborns in the country. The name Jack still tops the list of most popular English names, but it may not last for long. Muhammad will leave Jack behind already in 2008. No wonder: the number of newborn Muslims has increased by 12 percent during the recent seven years in Great Britain. Men’s names of Muslim origin take the lead, although women’s names of oriental roots lag seriously behind. Aisha was the most popular name given to newborn girls in British Muslim families in 2006, although this name ranks only 110th on the list of most popular women’s names in Britain. 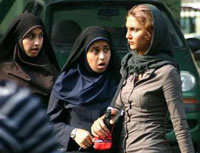 It is worthy of note that the number of native British citizens converting to Islam has been growing too. Many of them decide to change their religion in the endeavour to improve their financial well-being. The role of Muslim individuals in the British society has been getting more and more important recently. Muslims’ incomes are higher as opposed to those of Christians. There are a lot of Muslim real estate owners in Great Britain. Recent opinion polls conducted among British Muslims aged from 25 to 34 showed that an average Muslim person makes up to 25 pounds sterling ($50,000) a year, which is a bigger number in comparison with an average Briton. Unlike the Arab-Muslim community of France, the Islamic community of Great Britain leaves the native population behind in many aspects, slowly but surely.

The increasing popularity of the name Muhammad is connected with the growing number of young Muslim families in Britain. Professor of Ethnic Relations at Warwick University, Muhammad Anwar said that Muslim parents try to exercise their ties with religion when they name their baby boy Muhammad. Young parents are certain that this name will bring happiness to their child. Many of Muslim adults believe that a boy with this name will grow into a good, well-mannered man.

British parents, who name their sons Muhammad, mainly originate from Bangladesh, India, Pakistan and Arab countries. The British Muslim community is the third biggest Muslim community in Europe after France and Germany. A research conducted by analytical company Information Solutions showed that the majority of English Muslims reside in the north of England, especially in Yorkshire. The population census of 2001 revealed that English Muslim families counted 1.6 million people, which made up 2.8 percent of the total number of population. Needless to say that the birth rate among Muslim people is a lot higher than that of people of other confessions. This trend is expected to intensify in the future taking into consideration the increasingimmigration from Asia.

Deputy Director of the Institute of Oriental Studies of the Russian Academy of Sciences, Vladimir Isayev, does not believe that the popularity of Muslim names on the British Isles should be considered as something alarming. “This is quite a traditional phenomenon for people originating from Islamic countries. Furthermore, it does not mean that England will turn into a Muslim state during the forthcoming couple of years. It may only happen in some 20 or 30 years, if it happens at all, of course. On the other hand, Europeans may disappear because of the ongoing Muslim immigration in European countries in about 120 years. But these are only forecasts. We can recollect the forecasts about crude reserves made in the 1970s. Then specialists used to believe that crude reserves would be exhausted on the planet in the beginning of the 21st century,” Isayev told NewsInfo website.

The growing popularity of the name Muhammad in Great Britain demonstrates the increasing influence of Muslims in the UK. However, it does not mirror the real influence of Islam on the country. It is worthy of note that many Muslims give their children English names so that it could be easier for them to integrate in the English society. This way or other, England may become an Islamic country in the future. If this theory becomes a reality, London may change the character of its relations with Russia because Russia traditionally stands on the sides of its Muslim partners in international policies.

Russia will have to ease its stance on the North Korean problem to preserve its sympathies in the Muslim world. In addition, future Russian administrations will have to support Arab movements that harbor anti-Israeli sentiments.

The notion of the Muslim world unites hundreds of millions of Arabs, Persians, Pakistanis and many other nationalities. Vladimir Isayev said in an interview with NewsInfo website that many France-based people of Arab origin proudly refer to themselves as the French. It may mean that European countries will not change their political traditions if Muslims are going to dominate their population.

Europe is proud of its unity, although recent events connected with oil and gas deliveries from Russia and the deployment of the US missile defense system have proved the opposite. “Muslim Europe” may pose a potential danger for Russia against the background of Russian problems in the Caucasus, which is also dominated by the Muslim population. Russia will have to preserve its anti-US political course to avoid that because the USA is believed to be a satanic state for the Muslim world.

Say what you want on Pravda.ru English forum