Who are you, Frau Merkel?

Angela Dorothea Kasner (her full maiden name) first saw the light in Hamburg on July 17th, 1954, only three weeks later she was brought in a pannier to Quitzow, a village in the Prignitz region of Brandenburg, in the German Democratic Republic. Having become a pastor, Horst Kasner took the family there years later to Templin in the Uckermark. It is difficult to say why a Protestant priest decided to move from Western to Eastern Germany. There was a growing need for pastors in the GDR, where churches were looked upon as a relict of “reactionary bourgeois” system. 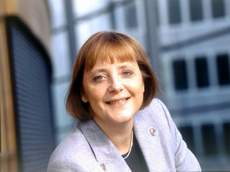 In any case, it was impossible to be a pastor in the GDR without being in contact with the State Secret Police. There were a very few exceptions to the rule. Kasner became a leading member of the Weissensee Work Group, a “brotherhood of priests” who cooperated with the state authorities. The State Secret Police controlled the activities of the group. The atmosphere in Angela's house was undoubtedly political.

Angela could feel the difference between herself and her schoolmates since her early years in school. She was the pastor's daughter in the Workers' State and therefore could make a career only if she worked hard. The rights of pastors' families were restricted in the DR. Herlind Kasner, her mother, was banned from her profession. The girl realized the importance of staying at the background, of being inconspicuous, and being better than the others in terms of studies. Angela also learned to separate her personal life from the public property as opposed to the Marxist theory. Merkel has never broken the rule since she became a well-known politician. She always kept her private life in a locker.

Merkel studied physics at the University of Leipzig. She married Ulrich Merkel during her student years, the marriage lasted for five years. Merkel worked at the Academy of Sciences of East Berlin after graduating from the university. Despite the fact that her colleagues at the Academy did not see any signs of a potential leader about her at the time, she made a career both as an academic and a local leader of the Free German Youth, a Communist youth organization akin to the Soviet Komsomol. Although Merkel seems reluctant to speak about it these days, she was in charge of agitation and propaganda for the young Communists at the Academy. It was quite an achievement for the pastor's daughter. Merkel earned her master's in physics in 1986.

Later Merkel has repeatedly said that the membership in the Communist youth organization was a must for those who wanted to study at the university in the GDR. Even if her “agitation and propaganda” stint was a political maneuver, it shows Merkel's ability to adjust to the circumstances. Perhaps her membership in the Communist youth organization was just a career requirement though she never did anything to challenge the regime of the GDR.

Angela Merkel is a fast climber in terms of a political career. In the 1989 she became a deputy to the press secretary of the last government of the GDR under Lothar de Maiziere, in December 1990 she turned into a parliamentary representative for the CDU, a few weeks later Federal Minister for Women and Youth and then Minister for Environment, later Secretary General, Party and Faction leader of the CDU.

However, in 2002 Merkel “stepped over the dead body” of her benefactor when she published an article calling on her party to emancipate itself from its own Honorary Chairman Kohl who had been allegedly involved in several scandals regarding illegal funding of the CDU election campaigns.

In one of her interviews of 2004, Merkel put it this way: “Before I also wanted power – power over molecules. For me the point is to shape things. That's what I'm doing now in quite another field.”

Meanwhile, Merkel's ideological convictions are hardly fit for accepting the “Rhenish capitalism” traditional in West Germany, with its gentle demands on the citizens and social teachings of Catholicism. She believes in a market economy, efficiency and liberalism. Her tough stance on a number of economic issues resulted in her partial approval of the extremely unpopular social and job market reforms package pushed by Schroder's government. At the same time, she harshly criticized the proposed reforms emphasizing the need for more radical changes. Her position has eventually brought her into conflict with her own party supporters and the chairman of the CDU. The CSU, the regular younger partner of the Christian Democrats, was especially critical of her attitudes.

Merkel's younger years in the GDR has undoubtedly formed in her a deep-rooted positive image of America, “the land of the free.” She is a fundamentally pro-American not only with respect to historic discourse (she is confident that the unification of Germany would have never happened if the United States had not provided full support to the plan) but also regarding her political positions on the U.S.-led invasion of Iraq. However, contrary to the allegations printed by some newspapers, she never demanded the deployment of a German military contingent in Iraq.