In his farewell speech, Britain’s Prime Minister, Anthony Blair stated, “this country is a blessed nation. The British are special. The world knows it. In our innermost thoughts, we know it. This is the greatest nation on earth”. We all knew that Blair, the son of a barrister, was a virus inoculated in the Labour Party, a Trojan horse programmed to destroy the leftovers of English socialism. But we were not aware of his hysterical chauvinism, his supremacist hallucinations, his superiority complex. 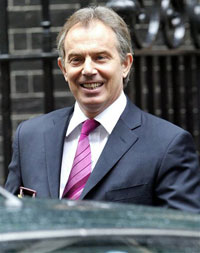 The primitive brain of Anthony Blair seems to be unable to recognize other cases of this “we the chosen people” feeling throughout history. Nowadays, his friend George W. Bush uses this “number one” formula quite frequently to spoil the soldiers he sends to Iraq. So who is first? Who is more special? Who is God’s dearest? Blair is obviously using a war rhetoric, trying to awake blind nationalism in the people he has been in charge to kick during the last ten years. He probably hopes that they will be stupid enough to sacrifice their children in the fields of Iraq or Afghanistan for the Queen’s sake. The Imperial offensive he has undertaken in coalition with the American oil Junta without external provocation or danger for his country will archive his mandate as one of the dirtiest chapters of England’s modern history.

England ’s foreing policy has traditionally pursued two major goals: One, to avoid the rise of a dominating European power. Two, to exclude continental powers from sea expansion. This is why England has always instigated war between Europeans in order to divide them and weaken them. This is why England unashamedly acts as an American agent inside the European Union, trying to sabotage any common policy attempt. But while England fragmented Europe by instigating war, they seldom suffered the consequences of such in their own territory. As an example, in World War II, German bombings on England “only” made 60.000 civil casualties. In the whole war, less than 300.000 men in arms were killed. If we compare these numbers with USSR’s 20 million dead, we understand that the country was greatly spared from devastation.

The sea has always been the natural defence of the island. It is a psychological protection as much as a physical barrier. An outside visitor is not regarded as a friend but as a potential invader. This island mentality has forged the English character. They need to be apart, separated from the other. The can just interact with other through conquest and assimilation. Consequently, The United Kingdom, Canada, the United States, South-Africa, Australia and New Zealand, the main Anglo-Saxon colonies integrating the so-called Anglosphere, are situated in the perimeter of the world, away of potential threats. From their position they still control maritime world traffic, pretending to hit without being hit. Little wonder if the war party regularly succeeds to fool people there. Their houses have rarely been burnt, their children have rarely been slaughtered. However, this is not so valid in the atomic space age. They know it and again, they are trying to “isolate” themselves from any potential competitor, so that they, the “special” people, can keep ruling the world, giving us, the not so special people, just the crumbs of the cake.

But we cannot blame them for that. Geopolitically speaking, England is an island at the corner of Europe, itself an appendix of the Asian Continent. A strong European continental power would necessarily move the centre of decisions eastwards,bringing England to an irrelevant role in European affairs. Nowadays, the European Union is a puppet in Anglo-Saxon hands. Unleashed capitalism and financial dictatorship is being implanted everywhere in Europe. Anglo-Saxon economic Darwinism is demolishing the European welfare state model. For Anglo-Saxons, humans are not equals but rivals in eternal struggle. The strongest will normally and fairly prevail over the weak. Anglo-Saxons don’t understand what solidarity means. They just know about compassion. This is the ideology of such a special people.

In foreign policy European leaders have massively aligned with the Anglo-Saxon Imperial offensive. In home policy they have just capitulated to International capital inverstors. Now, they are being pushed to confrontation with Russia concerning the sanitary belt the United States pretend to encircle Russia with in order to cut any Russian influence in Europe, the Caucasus or Central Asia.

But the facts show that it is not Russia the one attacking. The settlement of American bases in Romania, the Czech Republic, Poland, Georgia, Kyrgyzstan, Uzbekistan, Iraq, and Afghanistan obviously indicates encircling besieging movements familiar to any confirmed strategist. This is a very dangerous game. Pressure on Russia concerning the Litvinenko affair, or the Russian energy policy, harassment on Byelorussia and Ukraine, and the installation of an American missile shield in Eastern Europe, pretend to cut Russian influence on Mittle Europa and to abort the Russian – German Baltin pipeline project. The final goal being tearing the Russian state apart into four or five minor states and easily pump the gigantic Siberian resources. English intervention in Russia is not new. The Dardanelles expedition, the landing of English expeditionary forces in Murmansk and Archangelsk in the 1918 – 1919 campaign acknowledges so. Western media have massively backed this agression campaign. The execution of David Kelly by British secret services, the handling of weapons and ammunition to Chechen rebels through Georgia or the evidence that a secretive and elite unit of the British army is actively engaged in bombings and attacks inside Iraq which are subsequently attributed to Sunni insurgents, don’t seem to be existing for Western mercenary media propaganda. The genocides committed in Iraq and Afghanistan are for them less important than the last demostration in Moscow or Minsk.

At the moment Mr. Blair bet is doing quite well. Barely a hundred soldiers downed for two invasions is a really good deal. The act of piracy perpetrated on the Iraqi people is meant to enrich British companies with billions of pounds in oil. But the trend could change if Israeli-American airstrikes hit Iran. Ten thousand expeditionary soldiers would then be trapped between the desert and the sea. Perhaps Mr. Blair’s farewell speech was dedicated to them. At least, they will die feeling themselves “special”.

Mr. Blair will be remembered as one of the main instigators of the perpetual war doctrine. As he declared in his last speech to the Australian Parliament, “this war on all fronts should last during several generations if necessary”. This is the heritage Mr. Blair leaves to the children of the world. I wonder if this monkey can possibly be considered as a member of the Homo Sapiens Sapiens specie. To date, 700.000 Iraquis have already been massacred by Mr. Blair’s murderers. Let’s hope that justice will be done some day.