Robert Zoellick, a nimble negotiator as trade chief and later as the country's No. 2 diplomat, is President Bush's choice to head the World Bank in hopes of ending the turmoil surrounding outgoing bank president Paul Wolfowitz. 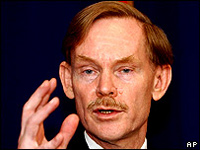 He would succeed Wolfowitz, who is stepping down June 30 after findings by a special bank panel that he broke bank rules when he arranged a hefty compensation package in 2005 for his girlfriend, Shaha Riza, a bank employee.

The controversy led to calls from Europeans, the bank's staff, aid groups, Democratic politicians and others for Wolfowitz to resign from the poverty-fighting institution.

A seasoned veteran of politics both inside the Beltway and on the international stage, Zoellick, 53, has a knack for mastering intricate subject matter and translating it into policies. He is known for pulling facts and figures off the top of his head. He also has a reputation for being a demanding boss.

Zoellick announced last June that he was leaving his post as deputy secretary of state to join a Wall Street firm and work to develop investment markets around the world.

At the time, Secretary of State Condoleezza Rice said Zoellick had served as her "alter ego" in the department. He was widely believed to be have been interested in getting a promotion and becoming Treasury Secretary.

If ultimately approved as World Bank chief, Zoellick will need to regain trust, rebuild credibility and mend frayed relations inside the institution as well as with its member countries around the world, the AP reports.

"He's an outstanding choice. What he brings to the bank is an ability to get things done, an ability to work with people and an excellent reputation among foreign policy types across the world ... something we badly need," former Secretary of State James Baker, who has worked closely with Zoellick, told Reuters by telephone.

Baker acknowledged that Zoellick does not have extensive development experience, but said he was a pragmatist who "knows how to build coalitions and achieve consensus" - crucial at a large bureaucratic organization like the World Bank.

Others were concerned about naming another Bush loyalist to head the bank and saw this as a missed opportunity.

Zoellick was one of 18 mostly conservative figures, including former Defense Secretary Donald Rumsfeld and Wolfowitz, who wrote a much publicized letter to former President Bill Clinton in 1998 advocating removing Saddam Hussein from power in Iraq.

Soon after that he was chosen as a member of the "Vulcans" - a group of about eight senior-level officials, mostly from President Bush's father's administration - brought together under Rice to advise candidate George W. Bush on foreign policy before his 2000 presidential election, Reuters reports.