Prince Harry in Iraq: A helpless child in desolate country

Britain is abuzz with comments and rumors. The sentiment has nothing to do with changes in the leadership of the Labor Party or Tony Blair’s upcoming resignation. The above events concern politics. However, there is simply no comparison between the number of Britons interested in politics and those who follow the news related to the Royal Family. The Royal Family recently found itself in the focus of a lively public debate, which seems to be quite political in nature. The debate ensued after the decision was made not to deploy Prince Harry, the 22-year-old heir to the British throne, to Iraq. 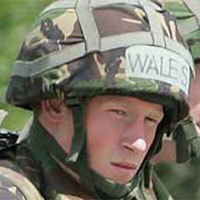 Prince Harry in Iraq: A helpless child in desolate country

Prince Harry – known in the Army as 2nd Lieutenant (Cornet) Wales – graduated from Sandhurst military college last year. The college specializes in training officers for combat operations. The Prince has been trained to command 11 men as a troop leader in a reconnaissance role. Ever since his graduation day, Prince Harry had been talking about his determination to go to the Middle East and fight for the ideals of freedom and democracy. Some commentators even made caustic remarks, calling the Prince Britain’s only soldier who is keen to go to Iraq.

Now it is rather difficult to find out whether Prince Harry really meant it when he said that he was eager to go. Last week General Sir Richard Dannatt, the head of the Army, announced that he had made a decision to keep Prince Harry at home. It is obvious that the Establishment does not want to take any chances and put the Prince’s life at risk. However, some people refused to accept the security reasons cited by the military to justify the decision. Relatives of 150 British soldiers killed in Iraq started asking questions why the life of Prince was valued higher than the lives of their loved ones. Relatives of those who have not yet died in Iraq want to know why fresh reinforcements are being sent to a country that has been considered a very risky place by the brass themselves.

The questions remain unanswered. According to General Dannatt, Prince Harry would have faced a kidnap threat no sooner had he set foot on Iraqi soil. Clearly referring to the critics of his decision, General Dannatt said that Prince Harry would have been unable to do the job for which he was trained without putting himself and his men at an unacceptable risk if deployed in Iraq. It was planned that Prince would be patrolling Basra and its vicinity in a Scimitar reconnaissance vehicle.

Quite a few experts have recently pointed out the reasons why the situation in British-controlled Basra looks seemingly better than that in other regions of Iraq. According to them, the situation in Basra has to do with the policy of complete noninterference conducted by the British troops with regard to local Shiite community. The experts warn that the Shiite militants in Basra could mount a number of serious attacks on British forces if the situation should change following a large-scale upheaval that may be caused by the enactment of a new oil law. Even without the worst scenario in the works, the 13 British personnel who died in April alone mark the deadliest period for the military since the start of the U.S.-led invasion on Iraq four years ago.

Some British tabloids have already suggested that Prince Harry might be sent to serve in a “tranquil” Afghanistan. A lack of comments on the Prince Harry story in the U.S. media speaks volumes. On the one hand, U.S. forces would be unable to protect a blue-blooded subject of America’s steadfast ally from terrorist attacks in Iraq. On the other hand, the British would be definitely offended if Americans were in charge of security of Britain’s potential sovereign.