At the 4-th International exhibition of arms MILEX-2007 that took place on May, 22 - 25 in Minsk (Belarus) Russian defense industry was presented more than impressively. The history MILEX begins in 2001. It is organized by "BelExpo" of the Presidential Administration, State Military-Industrial Committee and the Ministry of Defense of Belarus. This year BelTechExport was the general sponsor of the exhibition. 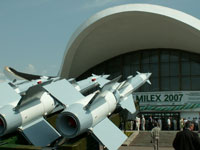 The exhibition space has considerably increased: 1500 sq.m. under roof and 3000 sq.m. open. Official delegations from 43 countries were invited to MILEX-2007. During the exhibition the 3-rd International Scientific Conference on Military-Technical Problems took place. 129 enterprises took part in the exhibition, including from Russia, Ukraine, Sweden. Numerous foreign visitors came from the countries of Gulf, Northern Africa, Venezuela, China, UAE, Oman, Syria, Libya and other.

The first day of the exhibition coincided with the second day of the visit to Belarus of the Iranian leader Ahmadinejad. Contrary to media’s expectations he did not visit MILEX. Nevertheless, Russian central TV channel RTR could not help mentioning this coincidence. In the background of the picture taken for RTR, there was a unique wheeled tractor MZKT which is now delivered to the UAE and has nothing to do with the Iranian desert. On the rank and file level in Belarus people get bewildered when central Russian mass-media ambiguously interpret events in Minsk, whereas exactly same things occurring in other capitals or in Russia are interpreted absolutely calmly.

Noteworthy, such position does not coincide at all with the opinion of the top managers of the Russian defense enterprises. In the interviews which deputy general director on marketing of Uralwagonzavod S.P.Kolosok and deputy general director on strategic development of Military-Industrial Company A.I.Abramchuk's gave to the correspondent of PravdaRu there was nothing but positive references regarding the situation in Belarusian defense sector and the prospects of the Russian-Belarusian military-technical cooperation.

To a point the on-going cooperation between Moscow and Minsk in the military sphere surprises even experts. As a matter of fact during last years Russia demonstrated a steady trend to get rid of some technological dependence on the former soviet republics. There a lot of vivid examples: aviation and rocket production, sea gas turbines ("soviet" specialization of Ukraine), cargo Il-76 (Uzbekistan) and other. All these technologies are being arranged in the Russian territory. With Belarus the situation is different. It seems that for the foreseeable future the partners have what to offer each other and the conditions of cooperation suit both parties. According to the head of the delegation of "Rosoboronexport" Valery Varlamov MILEX improved both from the point of view of organization and quality. At the first exhibition "ROE" represented the arms created only by the Russian enterprises whereas today the accent is done on the growing number of joint developments.

The press release of the Russian Federal Service on Military-Technical Cooperation (FS VTS) says that the Russian-Belarusian relation have long-term nature, they are founded on common political and economic interests. Russian delegation at MILEX-2007 was headed by the deputy director of FS VTS Vladimir Paleshchuk. According to Russian assessment of the exhibition it got "the reputation of an authoritative military forum on the European continent, enjoying the increasing attention of the military experts from various states." This wording is an unambiguously positive reference. In its press release "ROE" invited Russian and foreign media to visit MILEX.

Under the umbrella of "ROE" individual companies of Russian defence sector participated in MILEX:"Uralwagonzavod", "Military-Industrial Company", "Defense Systems", Kazan helicopter plant, "Splav", Penza "Electropribor", Nizhniy Novgorod Research Institute of Radio Engineering and other. Various modernization programs of arms and military hardware of the first generations including with Belarus made components were offered to the visitors.

The very fact that Russia brought to the exhibition in the land locked Belarus its proposals on the latest naval arms considerably increased the prestige MILEX among foreign visitors . The naval section of the Russian exhibition was featuring materials on the naval equipment items, such as project 11541 KORSAR and project 11661 GEPARD-3.9 patrol ships, project 12418 MOLNIYA guided missile boat, project 12061-E MURENA air-cushion landing craft. The representatives of ROE demonstrated to the visitors the materials on the latest family of multi-purpose corvettes, including the newest project 20282 (the first home version of the ship 20380 is to be commissioned with the Russian Navy this year) and the fastest project 1239 BORA guided-missile air-cushion ship with unique combat capabilities, dimensions and speed performance. The visitors to ROE’s stand could get the details on the best Russian fast caters MANGUST, SOBOL, SCORPION, YASTREB, MIRAZH, patrol ships and various naval arms.

This year Belarusian designers demonstrated somewhat surprising developments. Several companies presented a number of drones (UAVs) which at immediately draw the attention of foreign experts. There were UAV of tactical reconnaissance designed by the Military Academy of Belarus, "Phoenix" of the KB Mir of Minsk State Higher Aviation College, UAV of "Belspecvneshtechnika" and its autonomous navigating device together with the tactical navigating complex. "Molodechno T elecommunication Corporation" presented the ground and onboard radio-electronic equipment used on Russian bade UAVs (Brat).

Certainly, the most attractive UAVs were presented by Minsk Aircraft-Repair Plant - "Turman" and "Sterh" . "Sterh" is the experimental model which passes the first stage of flight tests. The 3m long UAV has 3,8 m wing span and the take-off weight of 53 kg. Development of these UAVs was ordered by the governmental structures, i.e. it is possible to assume, that Belarusian armed forces or other state structures would become the first consumers. Under the request of the Ministry of Defense of Oman presentation of the these UAVs was organized specially for the delegation of this country. Belarusian breakthrough into the sector of UAVs looks quite logical. In fact Belarus traditionally specialized on optics, communication, control systems and electronics, i.e. when all components of the UAVs are made in the country, this country should develop UAVs too. Unlike in Russia, where the designers of the UAVs cannot boast proper attention from the state, in Belarus it is possible to be sure, that all perspective developments will be supported on the governmental level. The fact that Russian exporters of arms and dual hardware have absolute mutual understanding in Belarus both with the state structures and with counterparts has been pointed out by the head of ROE’s delegation V.Varlamov.

MILEX-2007 had also several exhibits of not so noticeable, but quite meaningful. Belarusian "Radar" presented a new mobile digital radar station "Vostok" of the meter range, which “sees Stealth aircraft times better”. The National Academy of Sciences of Belarus presented the system of super precise landing for helicopters in bad conditions, a shooting simulator on the basis of laser technologies, new information technologies on the basis of supercomputers, technologies of recycling ammunition, developed together with the Russian scientists.