President Bush said he supports a $120 billion war spending bill on track to pass Thursday, ending weeks of wrangling with Democrats on whether to end the war. 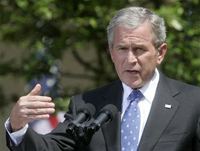 The bill funds the war through September as Bush wanted and does not set a date for U.S. troop withdrawals. In exchange for dropping restrictions on the military, Bush agreed to some $17 billion in spending added by Democrats to fund domestic and military-related projects.

"By voting for this bill, members of both parties can show our troops and the Iraqis and the enemy that our country will support our service men and women in harm's way," Bush said in a Rose Garden news conference.

The House voted 218-201 to advance the measure, paving the way for a final vote later that day. Democrats, who said they were disappointed with the White House deal, agreed not to block debate so long as the House would vote later this year on a separate proposal to bring troops come home before July 2008.

Obey said the deal was the best that Democrats could do manage because "the White House is in a cloud somewhere in terms of understanding the realities in Iraq."

The bill includes the nearly $100 billion that President Bush requested for military and diplomatic operations in Iraq and Afghanistan as well as billions in domestic spending, including $6.4 billion in hurricane relief and $3 billion in agricultural assistance.

Republicans were unhappy about the added domestic spending, but said they were relieved the final measure did not attempt to set a timetable on the war, the AP reports.

Pelosi said Democrats would quickly resume their drive to impose deadlines for pulling U.S. combat troops out of Iraq.

She said she would put on the House agenda a bill to repeal Congress' 2002 authorization of the Iraq war and said Democrats would use next year's military spending bills to try to end the war that has killed at least 3,420 U.S. soldiers and wounded more than 34,000. Iraqis have suffered far worse casualties.

According to a CBS News/New York Times poll, 76 percent of Americans believe the war is going somewhat or very badly for the United States and only 20 percent said Bush's recent troop increase is making a positive difference.

Congressional Republicans are beginning to talk about the possible need for a change in direction within a few months.

One influential Republican senator, John Warner of Virginia, said a new U.S. strategy might be needed by July if problems in Iraq did not improve.

House Republican leader John Boehner of Ohio, his voice cracking with emotion, denounced the insurgents in Iraq and said the United States must prevail.

Besides buying more ammunition, armored vehicles and aircraft for the wars, the spending bill provides more aid for countries ranging from Lebanon to Liberia and gives $185.5 million to help refugees and others displaced in Iraq, Afghanistan and African countries, Reuters reports.