The Republican administration of the US White House has been experiencing quite serious problems lately. George W. Bush's rating dropped down to the lowest point during his presidency. To make matter worse, Vice President Richard Cheney received a subpoena to appear at court during the hearings of a leak case, in which the defendant used to work directly with Cheney. 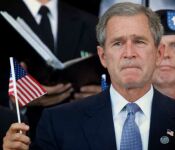 The results of the opinion poll conducted by Gallup research center look quite depressing for the Bush's administration. About 55 percent of respondents said that they would vote for a Democratic candidate, and only 39 percent would be ready to give their votes to Bush, if the USA held the presidential election during the forthcoming weekend. Forty-two percent of the polled say that George W. Bush could still fulfill his duties well, although 55 percent are certain that another person on Bush's place would be able to do a lot more and at a much better capacity. The people were mostly talking about the consequences of Hurricane Katrina, which seriously damaged the reputation of the incumbent American president. Forty-six percent of the polled said that Democrats would be able to end the war in Iraq, whereas only 40 percent stick to the opposite opinion.

To maker matters worse, the popularity of the American administration suffers from various scandals, which start happening on a regular basis in the USA. One of the most renowned of such cases is connected with intelligence officer Valerie Plame, whose name was mentioned by New York Times' journalist Judith Miller. The latter refused to expose the source of her information and had to spend three months in jail.

The FBI managed to find out, though, that President Cheney gave Plame's name to the chairman of his chief of staff, Lewis Libby, who in his turn exposed the name to the press. Libby rejected everything during interrogations, but it transpired later that he had given false testimony. Independent Prosecutor Patrick Fitzgerald accused Libby of perjury and obstruction of justice. If the former chairman of Cheney's team is found guilty on the leak case, he may spend up to 30 years in jail. In addition, Libby can be fined in the sum of 1 million 250 thousand dollars on each of the five counts of the indictment.

The prosecutor insists Cheney should appear at court himself. The vice president has a right to use the so-called executive privilege, according to which a top official from the country's administration can refuse to render information and testify in the Congress, or its committees, if the case is connected with strictly confidential information.

Meanwhile, spokespeople for the Republican Party urge George W. Bush to renew the personnel of his administration prior to elections to the Congress, which are set to take place next year, CBS said. There have not been any names specified in this connection, although Republican politicians make hints about the people from Cheney's milieu. President Bush, whose rating has dropped to the lowest level recently, was offered to apologize to the American nation for the actions of his administration. Otherwise, Democrats may control the two houses of the US Congress in the near future.

The chairman of the Center for North American Research of the Institute of World Economy and International relations, Elina Kirichenko, is certain, though, that official apologies will not be enough for George W. Bush to win the election. To improve the current state of affairs, republicans will be trying to shift their priorities to home policies first and foremost: the question of taxes, social expenditure and liquidation of Katrina's consequences are a lot more relevant to common Americans in comparison with the war in Iraq.

”The questions of home policies are a lot more important as opposed to foreign affairs. Republicans will deal with the structure of the future budget first and foremost. They need to exercise tough and economizing intentions – to cut taxes and budgetary spending, for example. However, it will be very hard to do it against the background of the recent natural disasters in the USA,” Elina Kirichenko told Pravda.Ru.

As for foreign policies, the specialist believes that the USA will most likely try to cease military actions and try to accomplish their goals with the help of diplomacy. “The bombing of North Korea is impossible. It is a nuclear power itself. The USA is not likely to drop bombs on Iran and Syria either: the losses in Iraq are too large,” Kirichenko concluded.