US to attack Syria 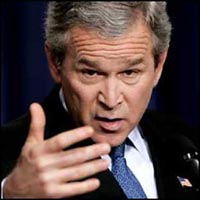 At the end of the last week the UN Security Council received a report from the special commission of the German investigator Detlev Mehlis. According to the report high officials of Syria and Lebanon may have been involved in the murder of the ex-PM of Lebanon Rafik Hariri. Syrian authorities stressed there were no evidence supporting this claim and called the report politically biased.

Meantime, the US president George W. Bush said that the UN had to apply sanctions against Damascus on a grand scale. He also used the opportunity to blame Syria for destabilization of the situation in Iraq and the collaboration with the international terrorism. "We expect Syria to do everything in its power to shut down the transshipment of suiciders and killers into Iraq," he said. "We expect Syria to be a good neighbor to Iraq. We expect Syria not to agitate killers in the Palestinian territory." He added that otherwise the USA would be forced to take actions. The last words were interpreted by many as a sign that the US is about to start a military campaign against Syria.

We talked to one of the leading researchers of the Institute of oriental Studies of Russian Academy of Science, PhD in history, Vladimir Isaev and discussed the possibility of a military operation against Syria.

Question: How likely is the US attack on Syria?

Answer: At the moment it is almost equal to naught. Americans have lost 2000 people in Iraq while the number of wounded is hard to be counted. Bush is becoming less and less popular in the US. They must deal with the Katrina consequences first…That is why the US administration is not really in the mood of starting the Syrian venture. However, it does not mean that the US will not threaten Damascus anymore. However, at the moment the threats mean only applying economical sanctions.

A: First of all, they may concern limiting oil exports like in the case with Iraq. It must be remembered that Syria extracts and exports quite a lot of oil, although its resources are much smaller than those of the Persian Gulf countries. And of course, one of the possible sanctions may be ban on weapons' supply. In its turn, this may harm Russia where Syria imports almost all of its weapons.

Q: What is the position of France? Syria was its mandated territory after the World War I…

A: I must say that it concerns not only France but the whole EU as well, because it is Paris that forms the EU policy in Syrian-Lebanese direction.  As far as declaratory statements are concerned France may agree with the US but it will not support any hints on military actions. France still has a great economic interest in Syria. Its companies unlike American and English ones are active on its market. Besides, the relations between Paris and Damascus have always been good on the whole.

Q: Now let us pay attention to the accusations directed to Damascus. The main one is that of involvement of Syrian public figures in the murder of ex-Lebanese Prime Minister…

A: Consider the wording of the UN report. There is no clear evidence of Syrian authorities being connected with the murder. It is only said that taking into account the role of Syria in Lebanon, the top heads of Syrian secret services must have known about the murder being planned. As there is no direct evidence, Syria considers this wording to be politically biased.

I'd also like to point out that Hariri's murder was presented quite lopsidedly in our mass media. Mostly there were reports about demonstrations in Beirut with demands to withdraw Syrian troops. Meanwhile, there were also demonstrations with demands to leave the troops alone. Up to two million people – that is half of the Lebanese population – took part in these demonstrations. Note that the opponents of Syrian presence are mostly Christians, as it would impede their business with Western partners.

Q: Another accusation consists in transshipments of terrorist groups from Syria to Iraq. Is it reasonable?

A: No, not at all. The border between Iraq and Syria is well protected, the transitions are not significant. The thing is that back when Hafez Asad and Saddam Hussein were in power, they had a great dislike for each other so the border was almost completely closed. After the death of Hafez Asad and Hussein's impeachment the present president Bashar Asad took all the measures to strengthen the border.

Q: How do Islamic Fundamentalists in Syria feel? Does Syria maintain connection with the notorious international terrorism?

A: Both Hafez Asad and his son Bashar have severely and even cruelly suppressed all the attempts to install Islamic regime in the country. In fact, in 1985 ten thousand Islamites that were trying to rise in rebellion were destroyed. There are large Christian community (ten percent of the population) and a smaller Judaic community. Moreover, both Asads promised to punish anyone who will dare to attack them. The country has churches and synagogues. Numerous tourists from abroad visit Christian sacred places. I want to emphasize that the official branch of Islam in Syria is Alavism that is tolerant to other confessions, Christianity especially. It's worth mentioning that there were Syrian recruits neither in Chechnya nor in Taliban Afghanistan.

Q: Can the neighboring countries – Israel and Turkey, for instance – become the vanguard of the anti-Syrian movement?

A: Israel has enough problems with the settlers of Gaza Strip. It doesn't care about Damascus. As far as Turkey is concerned, Syria expressed discontent with close ties between Israel and Turkey several times. Turkey was not satisfied with the way Syria treated utilization of Euphrates water. However, it is still a long way to the open hostility in Syrian-Turkish relations.

Q: What about Kurds?

A: There are not so many Kurds in Syria, about three or four percent of the population. They are enjoying all their rights there unlike in Turkey, for instance. Saddam Hussein persecuted them, whereas Hafez and Bashar Asad did not do this. That is why Syrian Kurds are more loyal to the authorities of their country.

Q: Is an “orange revolution” possible in Syria?

A: Not really. Bashar Asad is holding strong positions. He is supported by the majority of the population.  His regime is rather strict, but the punishing actions regarding the population are impossible in Syria. If there is an attempt to impose somebody from the outside the consequences may be terrible for the whole world. This will be more serious than just some “orange revolution”.