The long running Ecuadorean political crisis is about to heat up this week as caretaker President Alfredo Palacio has irritated lawmakers by deciding to call for a consitutional referendum without consulting National Congress. The move comes shortly after ousted leader Lucio Gutierrrez was arrested in Quito after returning from his exile in Colombia last weekend. 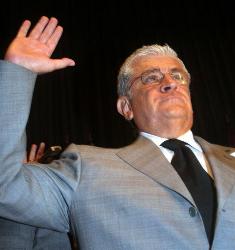 Palacio sent the proposal for a referendum directly to election authorities to decide whether to convene an assembly that would rewrite the constitution and perhaps even remove leaders from both the legislative and executive branches of government, El Comercio reported Tuesday. Lawmakers said the move was in itself unconstitutional and vowed to fight it.

The conflict between the two powers comes amid protests led by Gutierrez supporters who want him free and back into politics again. The new controversy could affect the fragile stability in the South American country as Mr. Palacio was named by the Congress after stripping Gutierrez of the presidency in April.

Palacio’s reforms have been backed by the Congress, which is the main supportof the President before a skeptic society. However, earlier Congress speaker Wilfrido Lucero vowed to fight what he called decisions that threaten democracy.