The Norwegian Nobel Committee decided to share the 2005 Nobel Peace Prize between the International Atomic Energy Agency (IAEA) and the director of this organization, Mohamed ElBaradei. The committee explained its decision with a need to mark the prize winners' accomplishments in the field of preventing the military use of nuclear arms and their aspiration to make the peaceful use of nuclear weapons as safe as possible. 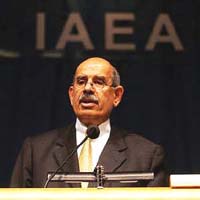 Observers believed prior to the announcement that the Nobel Committee would probably decide to mark the 60th anniversary of the bombing of Hiroshima and Nagasaki. Specialists particularly said that the committee would give the prize to those who struggled against the proliferation of nuclear weapons. Mohamed ElBaradei, the head of IAEA, activists of anti-nuclear movement, Richard Lugar and Sam Nunn, and Nihon Hidankyo (international confederation of Atomic and Hydrogen Bomb Sufferers) appeared as potential prize winners.

The 2005 list of nominees has reached the record number of 199 people. The list included the former president of Finland, peace mediator Martti Ahtisaari, rock star Bono, and even such “peacemakers” as presidents of Ukraine and Georgia, Viktor Yushchenko and Mikhail Saakashvili.

The chairman of the Nobel Committee Ole Danbolt Mjos said during the ceremony on Friday that the 2005 Nobel Prize would be awarded to the IAEA and its director Mohamed ElBaradei. The Nobel Committee praised the International Atomic Energy Agency (IAEA) and ElBaradei, a 63-year-old Egyptian, for work to prevent the spread of nuclear weapons to new states and to terrorists, and to ensure safe civilian use of nuclear energy, Reuters said.

A spokesman for the IAEA, Melissa Flemming, stated that the agency was extremely proud to have received such a prestigious award. President of France Jacques Chirac and the Prime Minister of Great Britain Tony Blair congratulated the agency and its chairman on the prestigious award. Russian officials also welcomed the choice of the Nobel Committee. Sergei Prihodko, an assistant to the Russian president, said that it was “an absolutely correct decision of the committee.” “ElBaradei absolutely deserves the award. He is a man of peace indeed,” the official added.

Mohamed ElBaradei was born in Egypt in 1942. Having graduated from the law department of the Cairo University, he started his diplomatic career in the foreign affairs ministry of Egypt. ElBaradei has been taking various positions at the IAEA since 1984 and chaired the organization in 1997. It is noteworthy that ElBaradei has been elected the director of the agency for the third time at the end of September despite USA's unwillingness to see him on this post.

Washington believed that the IAEA director's standpoint regarding the nuclear program of Iran was not tough enough. In addition, ElBaradei publicly expressed his doubts regarding the US-led incursion in Iraq in 2003, when ElBaradei and Hans Blix were chairing the mission of international inspectors in Iraq. It transpired at the end of the past year that US special services were tapping ElBaradei's telephone conversations with Iranian diplomats, trying to oust him from the position. The efforts were not a success, and the USA had to agree with the majority of the organization's members: the IAEA conference prolonged ElBaradei's authorities of the director for four more years on September 26.

The history of the Nobel Prize started in 1901; the award ceremonies take place in the capital of Norway, Oslo. When Alfred Nobel founded the prize, Sweden and Norway were comprising a unified state. All Nobel prizes, except for the Nobel Peace Prize, are awarded in Stockholm. The Swedish industrialist wrote in his will that the prize be awarded to the person, who contributed greatly to strengthen the brotherhood of nations, develop peace initiatives or cut the number of regular armies. This year the Nobel Peace Prize makes up $1.29 million. ElBaradei and his agency will share the award during the official ceremony, which is slated to take place in Oslo in December.

The IAEA, the world's center of cooperation in the nuclear field, was set up as the world's "Atoms for Peace" organization in 1957 within the United Nations Organization. It currently incorporates 130 states, including Russia. The history of the organization has its ups and downs. The agency failed to prevent the development of nuclear weapons in Pakistan, India and Israel. In addition, the current chairman of the organization is perfectly aware of the fact that the black market of nuclear technologies has gone out of control. It therefore brings up the idea that the present system of international control is outdated and inefficient.