Exit polls show that over 70 percent of Ecuadoreans voted yes to Rafael Correa’s proposal. The South American nation decided to cut off credit relationship with the International Monetary Fund. 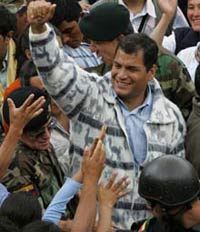 Leftist President Rafael Correa obtained a stunning victory on Sunday, as Ecuadoreans voted overwhelmingly to support his bid to rewrite the country’s constitution, in an attempt to weaken congress power. According to exit polls, 78.1 percent of Ecuadoreans said yes to the proposal, while 11.5 percent rejected it and 10.4 spoiled their ballots or cast blank ones.

CEDATOS-Gallup said 2,000 pollsters interviewed 40,000 voters nationwide with a margin of error in the result of 2 percent. Official results will not be available for five days.

"We have defended and achieved the right to express ourselves in the ballot box and hopefully in the future all political players will acquire these democratic values," an optimistic Correa told reporters earlier Sunday. Correa enjoys a 70 percent approval rating and polls predicted a majority would vote in favor of the referendum in a country long plagued by political instability and poverty.

Soon after the expected victory was announced, Correa said Ecuador had paid its last debt owed to the International Monetary Fund and cut off any credit relationship with the financial institution. "We don't want to hear from that international bureaucracy ever again," Correa told reporters, shortly after claiming a resounding victory in a referendum on rewriting the country's constitution.

Correa is a 44 year old US-educated economist who likes to be compared with the outspoken Venezuelan leader Hugo Chavez. Despite his radical speeches, Correa said he follows his own line for Ecuador and he is not intended to turn the embattled Andean nation into a Socialist country, as Chavez wishes.

However, Correa’s foes believe the President is going to make use of the Constituent Asembly, due to be called in the following months, to obtain more power and increase his authoritarian style. He has face tough opposition from the Congress, which Correa has labeled "a sewer of corruption". The discredited national Parliament had dismissed three presidents in the last decade, violating impeachment proceedings in the process, according to analysts.

Correa has offered few details on the anti-corruption measures he envisions will result from a new constitution. But he said a new charter should eliminate the authority of Congress — which is controlled by Ecuador's traditional parties — to name judges and other judicial and electoral authorities.

As usual when relevant events take place in Latin America, Chavez had something to say. The Venezuelan President wished the Ecuadorean people the best of luck on Sunday and said Correa "has taken on 21st-century socialism and the call for a constituent assembly with courage and bravery."

All along last week, Correa had joined the campaign of social and political movements, as well as toured some provinces to ratify the need to reform the current power structures. The Ecuadorian president multiplied his appearances on TV and radio, declaring that a favorable vote for the Constituent Assembly would lead the way to essential social and political changes.

However, Correa reasserted that the US Dollar will keep being the legal currency in the embattled Andean nation despite criticisms coming from leftist opinion leaders. The dollarization of Ecuador’s economy after several financial crisis sent millions under the poverty line and led to the bankruptcy of most of its industries.

Since took power three months ago, Correa has begun to increase spending on social programs, including doubling welfare payments to US$30 a month, expanding government loans for low-cost housing and upping social security payments for retired people. He is financing the sharp increase in spending by making use of hundreds of millions of dollars (euros) in emergency reserve funds created by record-high oil prices.

Correa has also promised to renegotiate oil contracts with foreign companies operating in Ecuador’s territory. The mover is expected to increase incomes in this highly oil-exporting dependent nation.