Last week's UN summit largely held the spotlight with the media. The summit put in the shade the meeting of NATO defense ministers that took place in Berlin also last week. The results of the meeting are quite noteworthy and can shed some light on plans of the world's most powerful military alliance and the future of Russia-NATO relations. 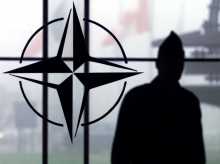 In short, the Alliance will step up its activities in various parts of the world. Speaking about the relations between NATO and Moscow, it would be fair to say that cooperation between Russia and the Alliance is not only developing on a constant basis, it is also shaping up as a dialogue between equal partners.

The drawing of a plan for further operations in Afghanistan stirred up the most heated discussions among the defense ministers. In the northern and western parts of the country, NATO troops are taking part in a peacekeeping mission under UN mandate. Meanwhile, in the south and east of Afghanistan US forces at times launch full-scale combat operations against the Taliban militants that are still quite significant in numbers.

Washington is not happy about the above situation. The Pentagon wants to combine two operations. France and Germany mostly represent the stance of Europeans on the issue. Europeans strongly object to the move since it is likely to lead to more casualties among the European military. The Berlin meeting indicates that US Secretary of Defense Donald Rumsfeld somehow managed to accomplish his mission though the accomplishment was not yet complete. Commander in Chief of NATO forces in Europe, General James Jones, will be in charge of foreign armed forces in Afghanistan. NATO troops should be deployed in the south of Afghanistan in May next year. The first NATO contingent will comprise Canadian, British, and Dutch troops. As a result, Americans are expected to reduce their contingent by 4,000 men and women.

Boosting the fighting capacities of Iraqi security forces can effectively condition for an early withdrawal of occupation forces from Iraq. Following the meeting in Berlin, NATO confirmed its commitment to open an academy in the vicinity of Baghdad in the near future. A thousand and five hundred Iraqi officers will be trained at the academy.

NATO defense ministers are realists and can appreciate that the situation in Kosovo is not so bright as painted by the Western media. That is why they discussed a number of measures aimed at stepping up effectiveness of the presence of 17-thosand strong NATO contingent in Kosovo.

The future of NATO's rapid reaction corps was also discussed during the Berlin meeting. On the one hand, the corps took action for the first time while partaking in the relief operation following hurricane Katrina in the United States. On the other hand, many issues relating to the corps e.g. who foots the bill for the corps' operations still need to be addressed.

Russian Defense Minister Sergei Ivanov traditionally attended the NATO meeting. Aside from confirming that cooperation between Russia and the Alliance was growing stronger, Mr. Ivanov also made a few political statements. Referring to the plans of Ukraine and Georgia to integrate into NATO, he said those countries were running the risk of taking the consequences because Moscow might take tough measures in response. Mr. Ivanov pointed out that Ukraine and Georgia were absolutely free to join military alliances yet Russia might revise the whole complex of relations (including economic issues) with those countries.

However, Ukraine and Georgia have no chance to join the Alliance in a short while. At the moment the integration of Macedonia, Albania, and Croatia into NATO has been put on hold. The above countries had hoped to become NATO members in 2006. Now their membership looks highly unlikely until 2009.

Cooperation between Russia and NATO has very good prospects. Russia and the Alliance agreed to run joint patrolling operations in the Mediterranean beginning next year. The patrolling will aim to disrupt arms traffic routes and other communications channels used by international terrorism and global criminal network. Russia and NATO will join forces in the fight against the drug traffic from Afghanistan.