Skanska likely to be involved in a corruption scandal in Argentina 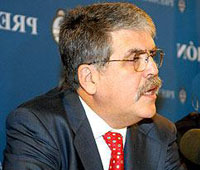 Skanska likely to be involved in a corruption scandal in Argentina

If finally probed, a major corruption scandal could undermine Argentina’s President Nestor Kirchner bid to become reelected in October. Local courts examined the offices of the National Ministry of Planning last week to collect evidence in connection with a case of bribery filed last year by opposition lawmakers.

The case involves the Swedish giant Skanska, which has already fired its Latin American CEO and closed its operations in Argentina, because the local branch “did not comply with its standards of transparency worldwide”.

Deputy Adrian Perez, from the center-left party Alternative for a Republic of Equals, filed a case asking prosecutors to investigate bribes paid by the local branch of Skanska to officials at the National Ministry of Planning in connection with the expansion of a gas pipeline in the North of the country.

Perez based his suspects in a previous investigation carried on by local judge Javier Lopez Biscayart who investigates Skanska for tax evasion in the amount of 6 million pesos (about $2 million). Lopez Bicayart has already probed that Skanska paid that money to “ghost companies” that did not provide Skanska with any service at all.

Perez believes that money was used to pay bribes to certain officials at the Ministry of Planning, led by a close collaborator and friend of President Nestor Kirchner, Julio De Vido. Mr. De Vido has been accused by the opposition and the local independent press for several cases of corruption ranging from bribing to overpayment of services in public works.

Kirchner’s administration discredited accusations saying that the works were not conducted under the regular system of public tenders. In fact, funds came from private companies operating in the energy market as the local Transportadora Gas del Norte and the Spanish Repsol YPF.

However, the Ministry of Planning was in charge of the technical surveillance of the works, which were completed in February 2006. At first, works were funded by both private companies, but the money was later due to be paid by the Argentine State. As a probe of that, the Argentine anti-corruption office has requested the file and could act in the case.

The scandal erupted as an executive of one of the “ghost companies” involved in the case confessed that his invoices were used to paid bribes. This person has been arrested and Skanska’s head offices in Sweden decided to fire about half a dozen of its executives in Argentina.

Despite investigations of corruption in the handling of public funds are frequent in today’s Argentina, this is the first case that has reached national media coverage. Opposition leftist leader and a candidate for presidency in October elections Elisa Carrio has repeatedly said that “Kirchner’s administration is the most corrupt in history”. Skanska’s case could confirm his remarks.