Chavez dismisses US evangelist's calls to assassinate him

"I do not even know who this person is. I do not care about his comments," said the Venezuelan Presidentin Cuba

The President of Venezuela, Hugo Chavez Frias, dismissed on Tuesday calls from a conservative US evangelist to assassinate him, but some of his top collaborators demanded a strongest condemn from the White House to the aggressive comments aired by the preacher. 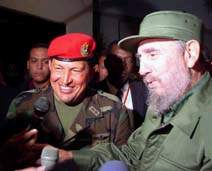 “I don't even know who this person is. I don't care about his comments,” Chavez told reporters from Cuba where he is paying a visit to his Cuban counterpart and closest ally, Fidel Castro. Meanwhile, the White House said that it does not “share the view” of the popular evangelist Pat Robertson, who had previously asked to bomb the US State Department and believes that feminists are “witches and lesbians.”

Also, the Pentagon denied it is preparing actions to satisfy Robertson's demands and did not want to get involved in his comments. “It is the opinion of a US citizen,” told reporters, the Secretary of Defense, Donald Rumsfeld, who had repeatedly said that Chavez is a threat for the US and a dangerous leftist agitator that puts democratic stability at risk in Latin America.

Despite Mr. Chavez did not take seriously the aggressive rhetoric of Mr. Robertson, some of his top collaborators demanded a strongest reaction from the White House. Venezuela's Vice-president Jose Rangel said Robertson's comments were “criminal” and challenged US policy against terrorism.

“It is hypocrite to condemn terrorism worldwide and tolerate terrorist declarations,” Rangel told reporters in Caracas. It has been also reported that the Venezuelan ambassador to Washington had been instructed to rise a formal claim to the US authorities on the issue.

Robertson, the founder of the Christian Coalition and a presidential candidate in 1988, said Chavez, one of Bush's most vocal critics, was a "terrific danger" to the United States and intended to become "the launching pad for communist infiltration and Muslim extremism."

President Chavez has repeatedly denounced alleged US plans to assassinate him and threatened to stop all oil shipments to North America if that ever happened. Last week, Chavez broke off ties with the US Drugs Agency (DEA) saying that it was behind plots to oust him from power.

On the photo: Chavez, in Havana, minimized Robertson's comments