USA fails to take health care of its wounded soldiers

Members of Congress heard wrenching testimony on Monday from wounded soldiers treated at Walter Reed Army Medical Center and contrite promises from top Army officials to correct the conditions there. 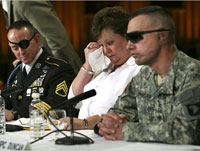 USA fails to take health care of its wounded soldiers

The general who most recently commanded Walter Reed, a premier military hospital in Washington, and the Army’s surgeon general accepted responsibility for the situation faced by some wounded troops, including poor housing, neglect and a hopelessly complicated bureaucratic maze.

The Army officials said they were working to address the problems at Walter Reed and were examining the situation at other medical centers.

“We have let some soldiers down,” said Pete Geren, the acting secretary of the Army, addressing the panel before the hearing began.

The hearing was held by a subcommittee of the House Committee on Oversight and Government Reform, whose members convened in an auditorium at Walter Reed, in deference to the soldiers who were to testify. The unusual venue also provided a vivid backdrop for the hearing, the first of several that Congressional committees intended to hold.

The subcommittee members heard first from two soldiers badly wounded in Iraq and from the spouse of another soldier injured in Iraq about their experiences at Walter Reed. Together, the three’s stories set the emotional tenor for the testimony from military officials that followed.

Wearing a black eye patch, Staff Sgt. John Daniel Shannon described how he was struck in the head by a round from an AK-47 in November 2004 during a firefight near Ramadi, causing a traumatic brain injury and the loss of an eye.

Within a week of the injury, he was released to outpatient treatment, Sergeant Shannon recounted.

Despite being extremely disoriented, he said, he was given a map and told to find his own way to his new residence on the hospital’s sprawling grounds. He wandered into a building and received directions.

He then waited several weeks wondering whether anyone would contact him about additional treatment, eventually calling people himself until he reached his case worker.

He told of languishing in the hospital’s bureaucratic system that evaluates soldiers for continuing in active duty or becoming medically retired, and what benefits they should receive. His paperwork, he said, was lost repeatedly, forcing him to start over several times, the New York Times reports.

The war in Iraq has divided our nation but the cause of supporting our troops unites us,'' said Sen. Carl Levin, chairman of the Senate Armed Services Committee. “We will do everything we can possibly do - not as Democrats or Republicans - but as grateful Americans - to care for those who have served our nation with such honor and distinction.''

As his committee questioned top defense officials, Levin also used the revelations of poor conditions and outpatient care at Walter Reed to take a swipe at Bush's war polices, the AP reports.

“Today's hearing is about another example of the lack of planning for a war that was premised on the assumption that combat operations would be swift, casualties would be minimal, and that we would be welcomed as liberators, instead of being attacked by the people we liberated,'' said Levin, D-Mich.