The forces of the UN Stabilization Mission in Haiti (MINUSTAH) have arrested about 70 people in recent weeks in connection with armed gangs operating in the embattled Caribbean nation. U.N. peacekeepers and Haitian police seized the last remaining gang stronghold in Haiti's largest slum on Wednesday, the latest in a series of military crackdowns aimed at stabilizing the impoverished and divided Caribbean nation. 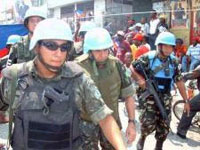 The MINUSTAH launched an operation called “New Age” in an attempt to crackdown on gangs. The operation focused on the Bois Neuf area, and MINUSTAH commander, Brazilian Maj. Gen. Carlos Alberto Dos Santos Cruz, the presence of police and soldiers is the first step toward normalcy in that area.

But according to observers the situation is far from being normal, as poverty and lack of perspectives reign among the population. Last month, a senior UN official said that the Haitian government desperately needs the support of the international community if the fledgeling democracy is to stay afloat.

Countries such as Haiti, which are coming out of long periods of conflict, have a strong tendency to relapse unless there is "strong and coherent support from the international community." U.N. deputy special representative Joel Bortroue told reporters.

The MINUSTAH Has carried on big efforts to disarm gangs, but the international community has failed in offering the Haitian people the key for the sustainable development after decades of unrest.

According to Mr. Bortrue, “These action (the fight against gangs) are good, but if we don't right away distribute the peace dividends to the population in these slum areas, the population will very, very rapidly loose confidence or trust in its government.”

Bortroue said funds must be "injected" into impoverished areas in the form of food distribution and school funding, as well as labor intensive projects such as rebuilding schools and cleaning canals that could spur economic development. "There is an urgency ... to show the population there's a difference between the time when gangsters used to run the show and when the government runs the show now," Bortroue said.

The MINUSTAH is in charge of the securiy of the country after joint French and US forces left moths after a Washington sponsored coup toppled former president Jean-Bertrand Aristide, Haiti's first democratically elected leader. Aristide went into exile in South Africa.